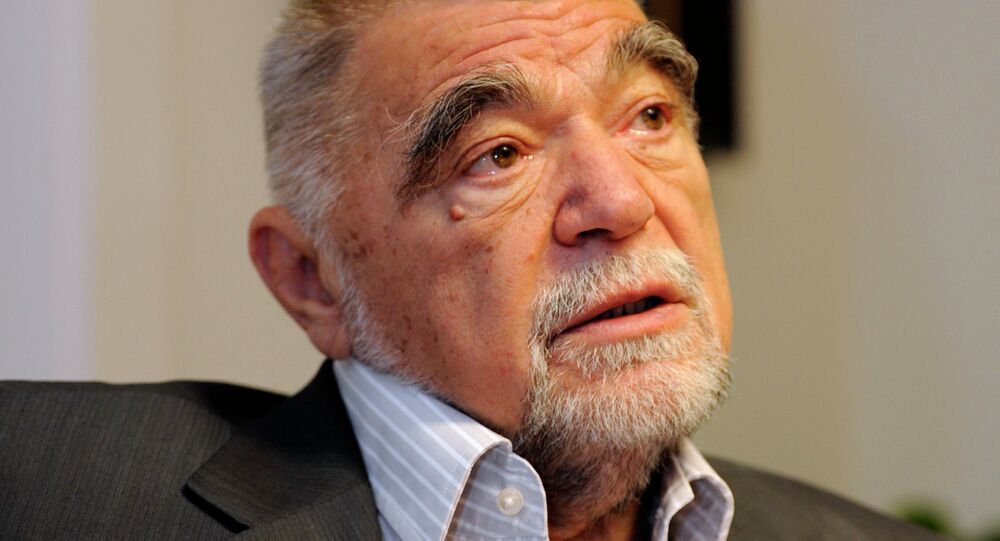 Croatia's former president Stjepan Mesic says he would have gone to Moscow for Victory Day, and it should be marked as a bulwark against the reappearance of fascism in Europe, to be celebrated together by all the nations of former Yugoslavia.

© REUTERS / Sait Serkan Gurbuz
WWII Victory Day Deserves Top Status in US - Veteran
Former Croatian President Stjepan Mesic said on Friday that if he was still president of Croatia, he would have gone to Moscow to mark the 70th anniversary of the defeat of the Axis powers in Europe, and that the Moscow parade is not a celebration of a particular government, but of victory over the greatest evil in world history.

"Some people celebrated the victory over fascism in Normandy, others want to celebrate it in Moscow, and it would be absolutely correct to celebrate it at the highest level. We must be conscious of the dangers we face today, because neo-fascism is appearing across Europe." said Mesic.

Speaking at an event in Belgrade named '70 Years Since the End of the Second World War,' Mesic articulated his belief that Victory Day should also be celebrated jointly by all the countries which were part of the former Yugoslavia, as a way of safeguarding the region against the reappearance of fascism, and averting the dangers of historical revisionism concerning the events of the war and its aftermath.

"Only if we do that can we expect a better future, but if we fall for this rush of radical nationalism, which can go out of control, then what will we experience?" asked Mesic, referring to the revision of history which is accompanying the rise in radical nationalism, citing the example former Yugoslav President Josip Broz Tito's memory.

Mesic spoke on the 35th anniversary of the May 8 1980 funeral of Tito, who was leader of the anti-fascist movement on Yugoslav territory during the Second World War and became president of the Socialist Federal Republic of Yugoslavia when the war ended. More than 150 world leaders, pointed out Mesic, "who knew very well what Tito was about," came to his funeral to pay their respects.

"It would be good if events on this subject [World War Two] were organized with many more participants from the whole region of the former Yugoslavia, because then those who want to turn the theme of revenge after the war's end into a major topic would have less chance," said Mesic on Friday.

"Instead of looking at what Tito's funeral looked like and all those who were there, which is indisputable, many would rather believe some Ustashe [a member of the WWII Croatian fascist movement] emigrant in Argentina, who told a story about revenge after the Second World War, and then that revenge gets turned into a great crime."

"In our region there are enough people who want to make victors out of the defeated, and proclaim the defeated as victors."

In March newly elected Croatian President Kolinda Grabar-Kitarovic fulfilled a pre-election pledge to remove the bust of President Tito from the president's office in Presidential Palace in Zagreb, along with other items dating back to the buildings' use by Tito as an official residence. The bust had been placed in the office by the first Croatian president, Franjo Tudman.

© Sputnik / Alexey Kudenko
Croatia's Ex-President Slams Western Leaders for Disregarding V-Day
"Tito was a dictator," said Grabar-Kitarovic, justifying the removal. A source close to the president told Croatia's Vecernji List that through the removal of the bust of Tito, "the president wants to make a break with communist totalitarianism."

"Anti-fascism can't be connected to communism, particularly not with the crimes and persecutions which took place during Tito's dictatorship" said the source, adding that Grabar-Kitarovic's voters consider Tito to be a dictator, and criminal.

The Union of Croatian Anti-Fascist Fighters reacted angrily to the president's move, which it called "a completely unacceptable act."

"One gets the impression that the president doesn't understand the historical events and circumstances in which Tito lived. He was a general, politician and statesman valued inside the country, and abroad," said the Union in a statement. "The removal of the bust is another in a series of revisionist acts which seek to depict Tito as a dictator, and the National Liberation Army as a communist, criminal army."