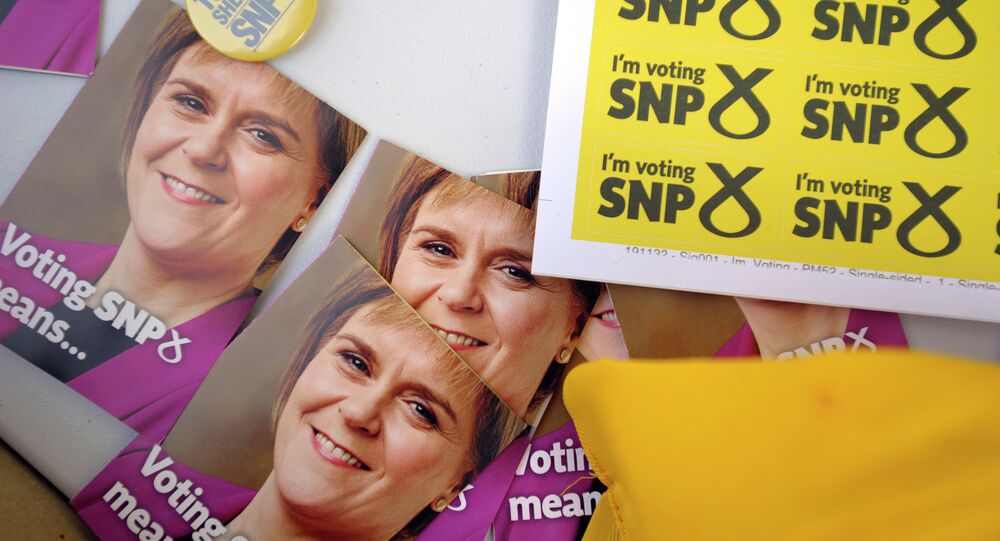 The Scottish National Party's former leader Gordon Wilson said that an unprecedented change of Scottish voters' preferences, who turned their back on Labour and largely support SNP is revolutionary.

LONDON (Sputnik), Anastasia Levchenko — An unprecedented change of Scottish voters' preferences, who turned their back on Labour and largely support the Scottish National Party (SNP) today, is revolutionary, the party's former leader Gordon Wilson said ahead of the general elections.

"Until recently, Labour had been the governing party of Scotland for decades… The change in such a short time seems revolutionary," Wilson, who was the leader of the Scottish nationalists for 11 years, told Sputnik.

Nevertheless, there are only 59 seats for the Scottish members of parliament at Westminster out of 650.

"So, power rests with the English parties and it must always be remembered that England has 80 percent of the UK's population," Wilson said.

Current poll trackers pit the two major rivals — Labour and Conservatives — to win no more than one-third of the total votes, leading to projections of another hung parliament in the UK's last two election cycles.

The two most likely outcomes of Thursday's race are either the formation of a new coalition or a minority government. The latter is subject to a so-called confidence and supply agreement between SNP and Labour, short of a formal coalition which both parties firmly deny being open to.

SNP's quadrupling in membership to over 110,000 people makes it the third largest party in the United Kingdom, surpassing the Liberal Democrats' 44,000 members.