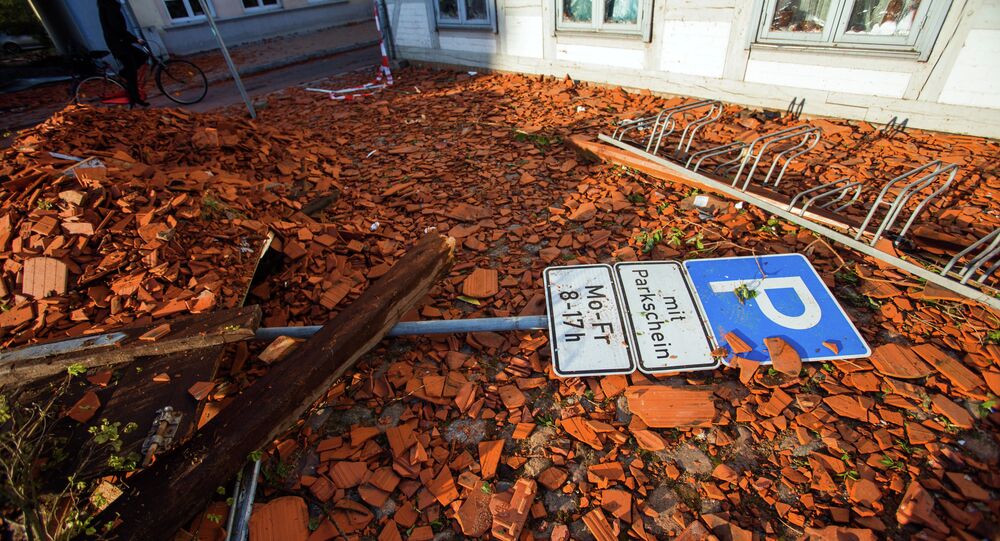 At least one person was killed and dozens more were injured after violent storms battered northern Germany; the town of Buetzow was especially hard hit by a destructive tornado.

Violent storms ripped through a number of towns in northern Germany, leaving at least one person dead and dozens more injured; Buetzow was especially hard hit after a destructive tornado battered the town, media reports said.

© AFP 2021 / DPA / JENS BUETTNER
A woman walks past debris of houses destroyed by a tornado on a street in Buetzow, northeastern Germany, on May 6, 2015

Witnesses in Buetzow said that hundreds of trees were ripped up, dozens of cars overturned and roof tiles torn off buildings, including the local hospital, with a matter of minutes when the tornado struck on Tuesday.

#Tornado in the small town of #Bützow earlier today with hook echo just before strike. No fatalities, mayor injured. pic.twitter.com/rZXGwuXszv

Buetzow Mayor Christian Grueschow said that the town had suffered "massive damage", with the town hall, a nursing home, a church and a hospital badly hit.

The clear-up was conducted by more than 100 emergency workers, who used two gyms as emergency shelters to accommodate about 300 beds for affected residents.

In the nearby port city of Hamburg, one person was killed by falling debris, and at least 30 more were injured.

84-mm rainfall was registered in Laage, about 23 kilometers to the southeast of Rostock.

The storms disrupted traffic across the region as fallen trees blocked roads and rail lines, including the railway line between Hamburg and Luebeck.

Weather forecasters explained that the storms were caused by a cold front that came after a spell of unusually warm weather in northern Germany. More rain, thunder and lightning are expected on Thursday.

Nearly Gone With the Wind: Close Encounter With Tornado