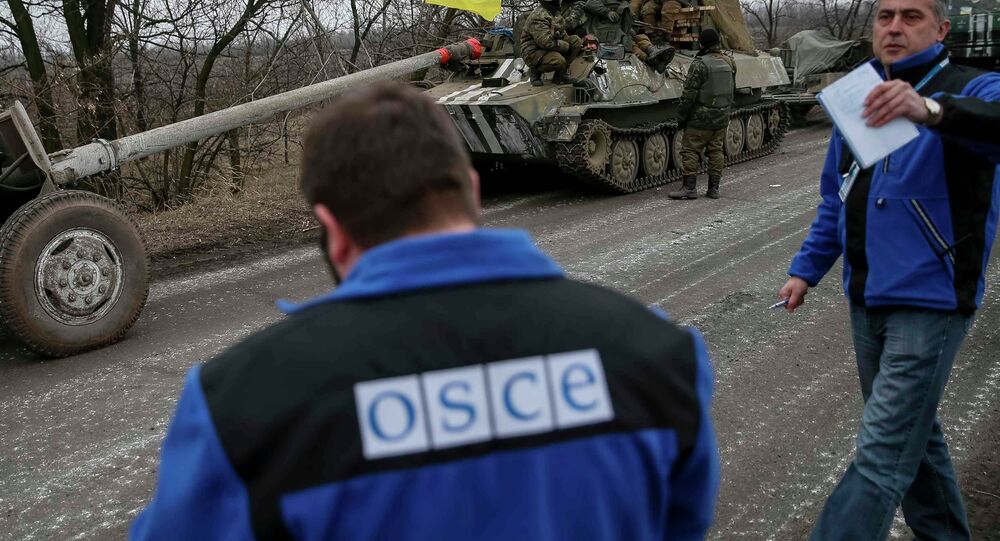 The deputy chief monitor of the OSCE monitoring mission in eastern Ukraine said that the OSCE monitors could not certify the implementation of heavy weaponry pullout by the warring sides.

VIENNA (Sputnik) — The Organization for Security and Co-operation in Europe (OSCE) monitors in eastern Ukraine could not certify the implementation of heavy weaponry pullout by the warring sides, the deputy chief monitor of the mission said Tuesday.

“I have to make it clear: the OSCE Special Monitoring Mission has not yet been able to issue certificates of compliance with this parts [of Minsk accords concerning security provisions], so there is still a way to go,” Alexander Hug told RIA Novosti.

© AP Photo / Evgeniy Maloletka
Ukraine Azov Battalion Fighters Take Over OSCE Observation Point
The announcement comes a day before the meeting of the three-party contact group, which includes representatives of Kiev, Moscow and the OSCE as well as envoys from the self-proclaimed Donetsk and Lugansk people's republics.

The negotiators are due to discuss with DPR and LPR representatives the formation of four working subgroups – on political, economic, humanitarian and security issues – to oversee the implementation of the Minsk agreements.

The formation of the subgroups was stipulated in the 13-point peace agreement worked out by the leaders of Russia, Ukraine, France and Germany and signed by sides to the Ukrainian conflict in Minsk, Belarus in mid-February.

Apart from the ceasefire, the agreement includes the establishment of a buffer zone in southeastern Ukraine through the withdrawal of heavy weaponry from the line of contact between Kiev forces and DPR and LPR militias.