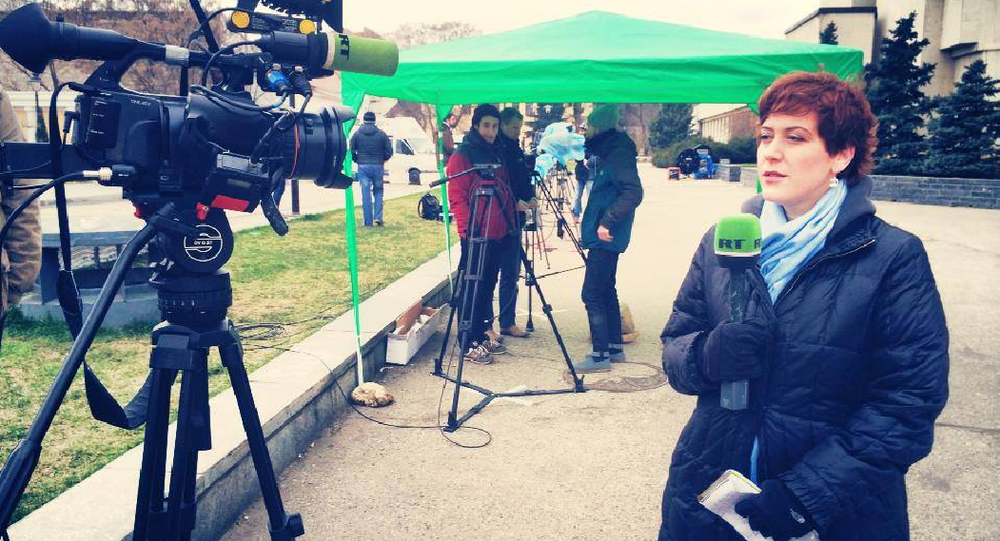 RT correspondent Paula Slier, who covered the fires in the exclusion zone around Chernobyl, left Ukraine after receiving threats from her Ukrainian colleagues, the channel’s press service said Tuesday.

© Sputnik / Maxim Blinov
Ukraine Must Better Protect Journalists After Recent Murders
A public appeal to “get” the RT reporter was posted on the Facebook page of blogger and Ukrainian Week journalist Denis Kazan.

"Paula Slier, who works for the Kremlin’s propaganda channel Russia Today, and who last year laughingly reported on RT as the “militia” burned Ukrainian soldiers with Grad rockets, is freely moving around Ukraine making reports from Chernobyl near Kiev. Gentlemen from the SBU (Ukrainian Security Council), this is your fault," Kazan wrote on Sunday, adding that “bastards” like Slier ought to be kicked out of the country.

The post set off an avalanche of angry comments, with some people calling to kill Slier.

Kazan’s story drew a quick response from Anatoly Shariy, a Ukrainian journalist who regularly exposes the lies spread by the Ukrainian media. In a video posted on YouTube, Shariy dismissed the charge against Slier as just another tall story concocted by Kiev’s propaganda machine.

Paula Slier has been working for RT since the channel’s launch in 2005. She has covered the armed conflicts in Syria, Libya, Egypt, Palestine, Israel and Ukraine, and interviewed the presidents of Israel, Lebanon and South Africa.

In 2013, Paula Slier was named one of the most influential public figures of her native South Africa.