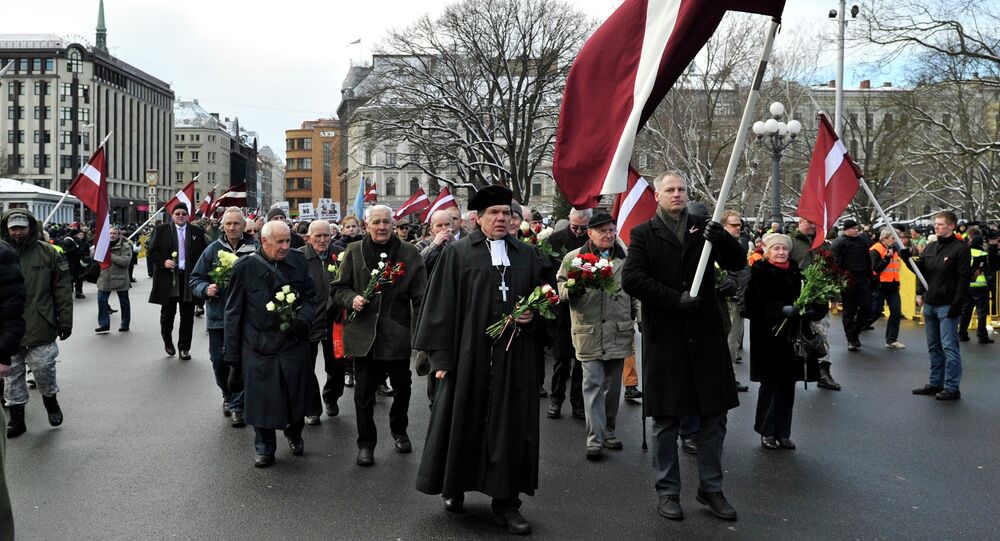 Nazis can freely march in Baltic countries and Ukraine, and local authorities do nothing to stop them.

© AFP 2021 / SERGEI SUPINSKY
‘One Race, One Nation’: Ukrainian Neo-Nazi March in Odessa
MOSCOW (Sputnik) — Russia is concerned with the growth of Nazi sentiment in Europe, as some countries have been trying to reinterpret the events of World War II, Kremlin Chief of Staff Sergei Ivanov told RT International television channel.

Speaking ahead of the 70th anniversary of the victory over Nazi Germany, Sergei Ivanov said:

"In the Baltic countries, in Ukraine, the Nazis march openly: carrying torches, Nazi symbols, for all to see. And we [Moscow] are very concerned with the inaction of the local authorities, who do not even try to put an end to this."

© REUTERS / Ints Kalnins
Riga Mayor Grateful to Citizens for Ignoring Nazi Vets Parade
He added that the Western media repeatedly accuse Russia of open propaganda, but in case of Nazism spread, it is "definitely" the West who promotes the Nazi ideology.

In December, 2014, Russia called on all UN member-states to back its resolution against the glorification of Nazism. Ukraine, along with the United States and Canada, voted against the Russia-initiated UN General Assembly resolution.

Last week, a poll conducted by ICM Research for Sputnik showed that only 13 percent of European nationals think the Soviet Army played the key role in liberating Europe from Nazism during the World War II.