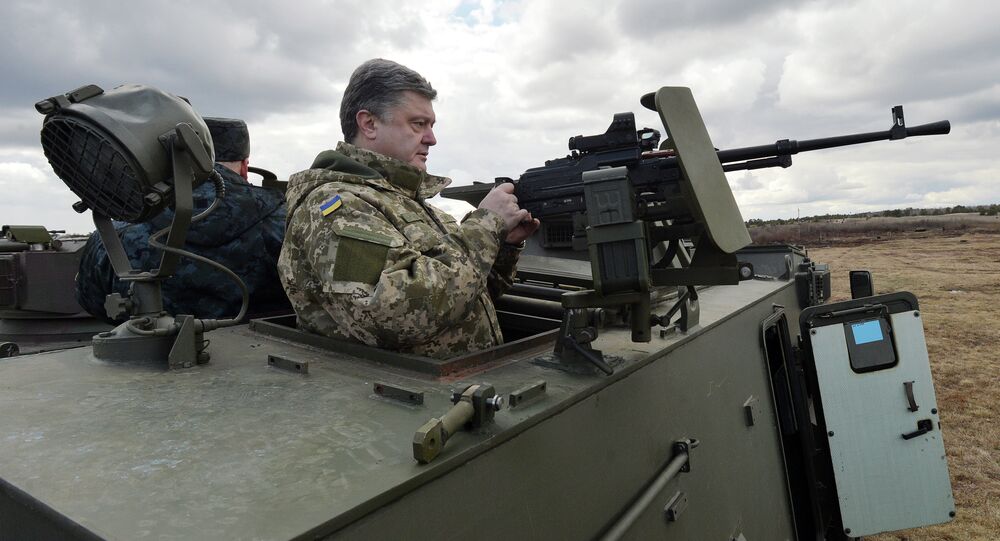 KIEV (Sputnik) — However, the Ukrainian president warned that he would impose a martial law in the contested region if government troops came under attack by pro-independence forces.

"I want to reassure you that the Ukrainian armed forces and I personally, as the supreme commander, give clear guarantees that we will adhere to Minsk agreement and will not launch an offensive [in eastern Ukraine]."

"…but if the Ukrainian troops are under attack, we will make all efforts to ensure their protection. A martial law will be introduced immediately," Poroshenko said in an interview with Ukraina television.

© AFP 2019 / YURIY DYACHYSHYN
US Should Send Diplomats, Not Military Trainers to Ukraine – German Politician
He also pledged to do his utmost to prevent further destabilization in Ukraine during the May holidays.

A new peace accord was reached in Minsk, Belarus, by the leaders of Russia, France, Germany and Ukraine on February, 12 following almost a year of hostilities in Ukraine.

The Minsk deal includes a ceasefire, the withdrawal of heavy weapons from the line of contact between the Kiev forces and independence supporters as well as amendments to Ukraine's constitution.