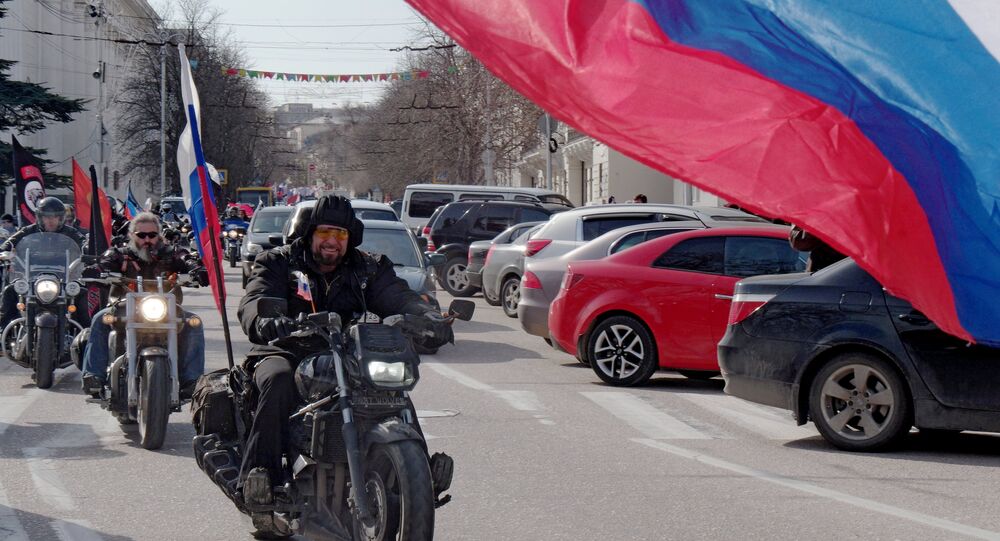 Commenting on a Russian motorcycle club's plans to stage a victory ride to Berlin in honor of the 70th Anniversary of the end of the Great Patriotic War, Czech Prime Minister Bohuslav Sobotka stated that he viewed the ride is a propaganda event aimed at countering the US's recent show of military might in Eastern Europe, Radio Praha has reported.

"I consider the ride by Russian bikers – to a degree — a propaganda answer to the recent journey by the US convoy, an attempt to balance the message through propaganda or in the media," Sobotka told journalists earlier Monday, following his meeting with Polish Prime Minister Ewa Kopacz.

"I do not think it is by chance that immediately after the US convoy passed through the countries, Russian bikers are to follow them," Sobotka added.

© AFP 2020 / BARTOSZ SIEDLIK
Polish Bikers Resolve to Ensure Safe Passage for Russia's Night Wolves
Kopacz had stepped out against the Night Wolves' trip last week, calling the event a political provocation, but noting that "the final decision will be made by the border guards." Sobotka told journalists that he had not discussed the planned event with his Polish counterpart.

Czech journalist Ladislav Kashuka preempted his country's prime minister's commentary last week, noting in the Czech Free Press that "unlike the Americans, who feel free to travel to Europe in armored personnel transporters…members of the Russian bikers club Night Wolves are just civilians who are planning to travel from Moscow to Berlin on their own bikes and without arms."

The journalist added that "unlike some people who have arrived in Europe to set up bases, the motorcyclists just want to peacefully travel to Berlin, lay flowers at the monument of fallen soldiers and return home."

© Photo : Courtesy of "Night Wolves"
Poland's PM at Odds With Country's Bikers Over Night Wolves V-Day Ride
Kashuka's sentiment echoed commentary in Czech social media and online news commentary sections. Last week, Czech news hub Novinky.cz quoted one Facebook user, who noted that "I hope that our government and the police will welcome the Russian bikers the same way they did the American convoy, and provide it with accommodation, food, accompaniment and all the other honors that should go to representatives of the people who freed us from fascism and whose soldiers laid down their lives for us."

About 40 members of the Russian biker club Night Wolves are planning a ride through Russia, Belarus, Poland, the Czech Republic, Slovakia, and Germany on their way from Moscow to Berlin to mark the 70th anniversary of the Soviet victory over Nazi Germany in World War II. The journey, set to begin Saturday, will wind through European cities before reaching Berlin on May 9th; the bikers are planning to lay flowers at the monument to Soviet soldiers in Berlin's Treptower Park.

© REUTERS / Ints Kalnins
Czechs Plan Multiple Protests of US Army's 'Operation Dragoon Ride'
Between March and April of this year, about 500 US military personnel and 120 vehicles trekked through Latvia, Lithuania, Poland and the Czech Republic in 'Operation Dragoon Ride', as a military show of strength which Russian observers have called provocative. The operation was met with multiple protests in the Czech Republic from political parties and civic groups.
...
Reddit
Google+
Blogger
Pinterest
StumbleUpon
Telegram
WhatsApp
169
Topic:
Russian Bikers' Victory Day Ride to Berlin (29)