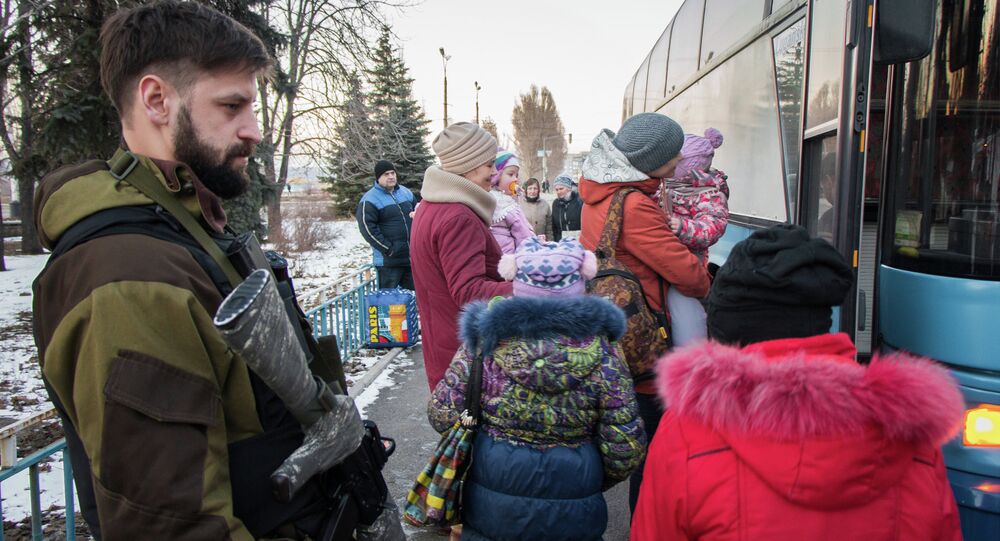 The kickback Ukrainians pay checkpoint guards for entry to the eastern territories embroiled by civil war has jumped to 2,000 hryvnia (about $90 US), Ukrainian news hub Vesti reports.

Speaking to Radio Vesti, Sergei Shakhov, a refugee from the Lugansk region and volunteer assisting the internally displaced persons organization Narodna Dovira ('People's Trust') noted that the bribe refugees and their relatives have to pay has reached "2,000 hryvnia." Moreover, Shakhov noted that people crossing the border face constant rudeness from border guards, while technical and other problems result in hundreds of people and vehicles queuing up at the checkpoints for hours at a time.

Last month, a new system of electronic passes was supposed to go into effect at checkpoints around Ukraine's eastern conflict zone. Speaking to Oksana Ermishina, the Chairwoman of the Public Committee for Internally Displaced Persons, Kiev's Voice of the Capital radio station noted that this plan has thus far failed to make a dent in combatting payoffs, with problems in electricity supply, communications, and the electronic badge databases themselves only exacerbating difficulties. Ermishina noted that in a situation of organizational chaos where nothing works as it should, "money talks, and until a clear system of automated procedures exists, corruption will only continue."

© Sputnik / Alexandr Kryazhev
Ukraine’s National Guard Illegally Sells Two Combat Helicopters Abroad
Problems of payoffs at checkpoints are only a drop in the bucket of Ukraine's problems with corruption, plaguing all levels of the economy, including security organs and the military. Ukrainian media have been reporting the arrests of dozens of police, Internal Affairs and Security Services personnel for the sale of fake passes, smuggling, kidnapping and extortion.

Loud scandals have also been exploding in Ukrainian media over payoffs to officers in charge of determining fitness for mobilization into the armed forces, with families paying bribes of thousands of dollars or euros to prevent their sons from being conscripted.

© AP Photo / Efrem Lukatsky
Mysterious Ukrainian Company Sells NATO Equipment
In Kiev, army officials up to the level of general have faced arrest, accused of corruption. Last month, Ukrainskaya Pravda cited MP Andriy Parubiy, who stated that "when the Americans gave us dry rations for the Ukrainian army, within a few weeks they appeared for sale on the internet." And earlier this month, a Ukrainian company calling itself the VT Group emerged online, selling NATO military and engineering equipment. Ukrainian and Russian media have also reported on schemes for the offloading of perfectly good Ukrainian combat equipment at the same time as the government buys up millions of dollars' worth of Western equipment.

The scandals plaguing the country's security and defense organs comes amidst claims by Ukrainian President Petro Poroshenko earlier this week that levels of corruption in the Ukrainian military have fallen dramatically. Speaking about the joint Ukrainian-US training exercises taking place in the western region of Lviv, Poroshenko noted that "in these six months we have proved that we have changed the military, with the help of volunteers and due to decisive actions by new officials at the Ministry of Defense and the Ukrainian General Staff."

© Sputnik / Sergei Kirkach
Corrupted Oligarchical System Prevents Ukraine From Conducting Reforms
Dmitri Trenin, Director of the Carnegie Moscow Center, a regional affiliate of the Carnegie Endownment for International Peace, has emphasized that Ukraine's corruption problems, plaguing all levels of society, go up to the highest levels of power. Trenin marks this down to the fact that the Maidan revolution of 2014 never managed to stamp out the country's oligarchical political and economic system, with the country's oligarchic clans only becoming more powerful since the departure of Viktor Yanukovych.
...
Reddit
Google+
Blogger
Pinterest
StumbleUpon
Telegram
WhatsApp
613