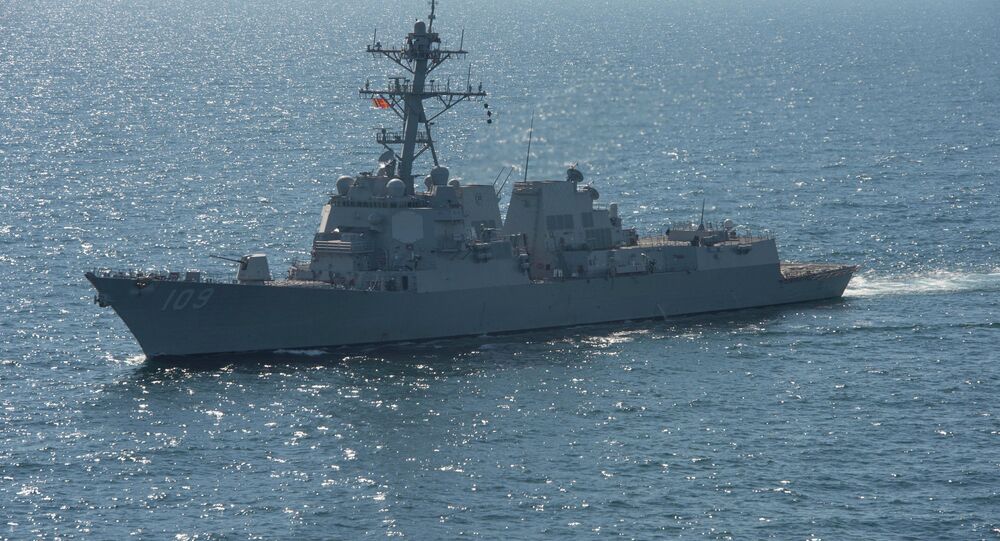 The US 6th Fleet has announced its guided-missile destroyer USS Jason Dunham has successfully carried out planned maneuvers with NATO allies in the Black Sea.

© AFP 2020 / SEIRON BAROIAN
Muddying the Waters: US Warship to Enter Black Sea to ‘Promote Peace’
US Naval Forces Europe has announced that the USS Jason Dunham successfully completed several drills in the Black Sea on April 5, having entered the waters on April 3.

"The Arleigh Burke-class guided-missile destroyer USS Jason Dunham (DDG 109) participated in two bilateral underway engagements with ships from the Bulgarian and Romanian navies in the Black Sea, April 5, 2015," said the Navy in a statement on Sunday.

"The exercises are aimed at improving maritime capabilities and reassuring our NATO allies and partners of our commitment to the alliance and to their security."

Last week the US Navy announced its destroyer would enter the Black Sea on April 3, as part of its "Operation Atlantic Resolve," which was launched last April in the three Baltic States and Poland, and which the US Army announced in February would be expanding to include Bulgaria and Romania.

The current operations are not the first time the USS Jason Dunham, which is expected to stay in the Black Sea until April 14, has conducted maneuvers in the Black Sea, having taken part in NATO's Sea Breeze operation there in 2012.

© AP Photo / US NAVY
US Navy Seeks Drastic Increase in Tomahawk Missiles on Attack Subs
USS Jason Dunham entered the Black Sea on April 3, and is expected to carry out operations there until April 14, also making a stop in the port of Odessa. According to the terms of the Montreux Convention, war vessels which do not belong to countries that possess land on the Black Sea cannot stay in the Sea for more than 21 days.

Its undertaking of drills in the Black Sea follow that of fellow US Navy destroyers USS Taylor, which conducted operations from April 22 – May 12 last year, the USS Donald Cook, USS Truxtin, and the USS Vella Gulf, all of which have conducted operations there over the past year.

In a statement on Thursday, Russian Foreign Ministry spokesman Alexander Lukashevich warned about the consequences of NATO's recent military buildup in Eastern Europe, commenting on reports that Romania may accede to the request from US military commanders to allow the deployment of heavy military equipment on its land.

"NATO buildup on the Eastern flank, or in the so-called 'front-line countries,' is an unprecedentedly dangerous step that violates all agreements, including the Russia-NATO Founding Act, which is still in force," said Lukashevich.

US Navy Joined the Strikes Against Houthi Positions on Monday