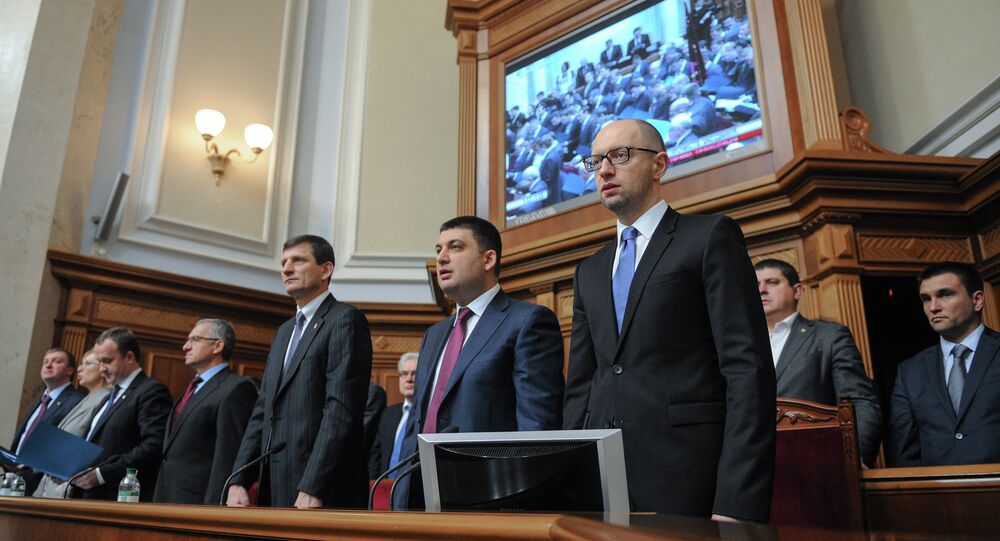 Ukraine's Prime Minister Arseniy Yatsenyuk prepares for a confidence as the conflict between him and the President grows.

A growing rift between Ukraine's Prime Minister Arseniy Yatsenyuk and President Petro Poroshenko surfaced during a conflict with oligarch Ihor Kolomoyskyi over state assets. Yatsenyuk has been attempting to negotiate with Germany separately from Poroshenko as Berlin is losing patience with Ukraine's lack of progress in European integration.

One legislator from Poroshenko's Bloc called the now-fired head of the State Finanсial Inspection Nikolai Gordienko's findings "just the tip of the iceberg."

Yatsenyuk said that the Gordienko implicated his cabinet in corruption after a "biased" audit of the state-owned Antonov plane manufacturer.

The country's parliament is scheduled to convene on Tuesday for what is expected to be a vote on Yatsenyuk's future as Prime Minister. Yatsenyuk is preparing by finding allies abroad while Poroshenko's Bloc is gathering support for his ousting in the Parliament.

The visit was not announced until the day before, and the announcement itself was largely ignored in Ukrainian media outlets controlled or owned by President Petro Poroshenko, which suggests a developing rift between him and the Prime Minister.

During the visit, Yatsenyuk broke from previous Ukrainian government rhetoric, telling Merkel that he supports holding an election in militia-controlled Donbass districts as quickly as possible.

The German move could be a political bet, as Poroshenko is increasingly portrayed in German official media as lagging on promises to follow the Minsk agreements and reform the government.

© East News / AP Photo/Sergei Chuzavkov
Western Trust in Ukraine Has Its Limits – German Media
Germany has grown increasingly impatient with Ukraine's leadership, as it has thus far failed to reform its government or investigate the 2014 Euromaidan sniper shootings.

In an editorial by Deutsche Welle, Germany's official broadcaster, the head of the Ukrainian editorial staff wrote that Ukraine is blocking the investigation in part because the suspects are being "covered up" because they are needed to fight the war in Eastern Ukraine.

The same editorial stated that Ukraine's reforms are failing to materialize not only because of the war, but also "because the power of the oligarchs and the old boy networks are still unbroken in Ukraine."

The editorial, together with official discontent, shows that while Germany showed Ukraine lenience because of its military campaign in the east, "Kyiv must also play its part, or risk losing the trust of its partners in the West."

Neither the editorial, nor German officials have thus far explained what "losing the trust" would mean for Ukraine's leadership.

How the Conflict Surfaced

YouTube/@PravdaRu
Biggest Threat to Poroshenko His Inner Circle: Kolomoiskyi on His Dismissal
The potential for conflict between President Poroshenko and Prime Minister Yatsenyuk surfaced on March 19, during a conflict between oligarch Ihor Kolomoyskyi and Poroshenko over the control of state-owned pipelines.

On March 23, a Poroshenko Bloc MP threatened to begin a corruption inquiry against Yatsenyuk's cabinet. The next day Yatsenyuk said that he backs Poroshenko over Kolomoyskyi after initially remaining silent on the conflict.

On March 27, the conflict was resolved and Kolomoyskyi agreed to resign from his position as governor. Sergei Leshchenko, a Poroshenko Bloc MP, then said on his blog that the settlement was a result of a political unity negotiated by US Vice President Joe Biden.

"Biden called Yatsenyuk and his political party and asked to demonstrate the unity with the President Poroshenko in restraining Kolomoiskiy," Leshchenko then wrote.

On Friday, Ukrainian lawmakers from Petro Poroshenko's Bloc and the far-right Svoboda faction began collecting signatures for Yatsenyuk's dismissal from his position as Prime Minister.