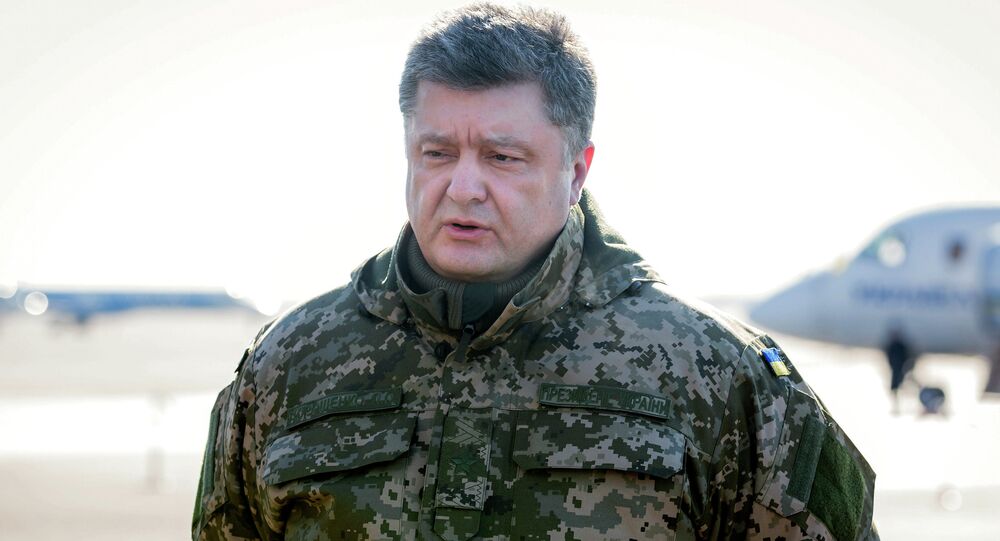 Ukrainian President Poroshenko has submitted a bill to his country's parliament allowing for the internment of Russian citizens living in Ukraine.

© AFP 2020 / ODD ANDERSEN
Foot in Mouth: Ukraine’s Poroshenko Commits Gaffe During University Speech
Russian citizens living in Ukraine can be interned in line with the bill on "The legal regime of martial law", submitted by Ukrainian President  Petro Poroshenko to his country's parliament on Friday.

According to a memorandum to the bill, "measures on the legal regime of martial law include internment (forced settlement) of nationals of a foreign state which threatens to attack or carries out aggression against Ukraine."

On January 27, the Ukrainian parliament adopted a bill recognizing Russia as an aggressor country.

In February, the amendments to the bill on martial law were endorsed by the National Security and Defense Council of Ukraine, which stressed the necessity of the new document being in line with current realities.

In late December 2014, President Poroshenko said that a martial law would be introduced if the ceasefire agreement on eastern Ukraine was violated. "No one will doubt even for a minute", the Ukrainian President said at the time.

© AP Photo / Petr David Josek
Kiev Commits 190 Ceasefire Violations Since March 26 - DPR
A set of measures for a peaceful settlement of the conflict on the territory of Ukraine's Donbass region was reached during talks in the Belarusian capital Minsk on February 12.

The parties agreed on a ceasefire and the withdrawal of artillery from the frontline of contact, as well as the exchange of prisoners.

The ceasefire regime, which has been in force in Donbass since February 15, is generally being observed, although though there are reports of shootings in some areas.