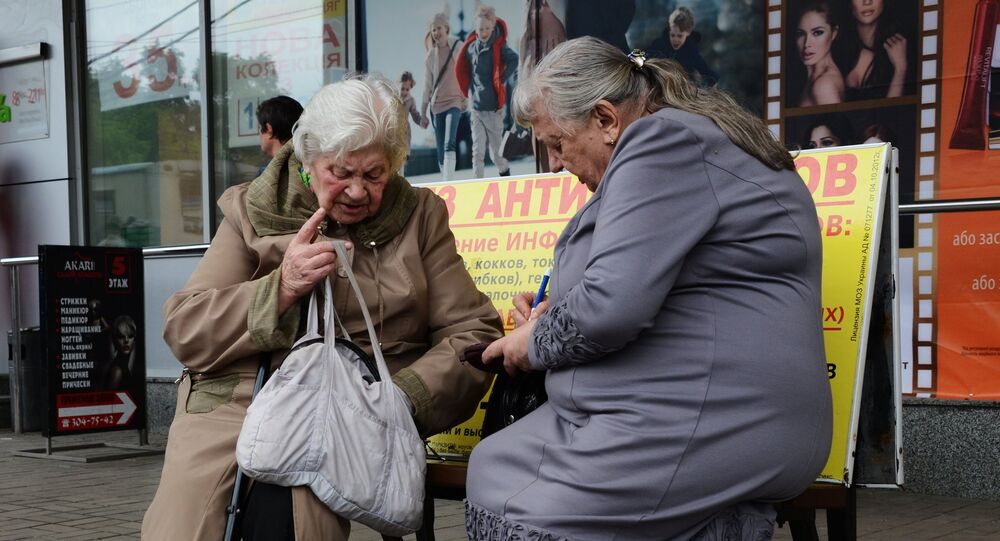 According to the United Nations High Commissioner for Refugees Senior Adviser, elderly in East Ukraine are being impacted more than in any other conflict.

"More than in most refugee or displacement situations where the elderly are a percentage, we’re seeing a much bigger percentage of the elderly being impacted in East Ukraine," Mason said on Monday.

A large percentage of elderly people who are internally displaced in Eastern Ukraine "are not able to receive their government pensions," Mason explained.

Consequently, she added, some are forced to leave to try to get those pensions again and "that is a big concern."

© Sputnik / Mikhail Voskresenskiy
Ukraine Must Solve Political Crisis Through Federalization - Le Pen's Aide
While the UNHCR is actively providing aid to older citizens who are the most vulnerable among the internally displaced persons and refugees, the agency faces financial shortcomings and difficulties gaining full access to certain areas.

"UNHCR unfortunately is having a significant financial difficulty globally right now just because of all the humanitarian crises we’re dealing with at the same time," Mason stated.

Because of violence in some parts of East Ukraine, the UN agency does not "have the access yet to be able to deliver assistance."

UNHCR is devoting its resources primarily to the elderly populations in Ukraine, as well as families with very young children.

"Financially, we don't have the resources to do everything that we want to do," Mason added.

The number of people internally displaced by the conflict in Ukraine has reached 1.1 million, according to the UN Refugee Agency. A total of 674,300 Ukrainians have sought asylum, residence permits or other forms of legal stay in neighboring countries, including 542,800 in Russia and 80,700 in Belarus.