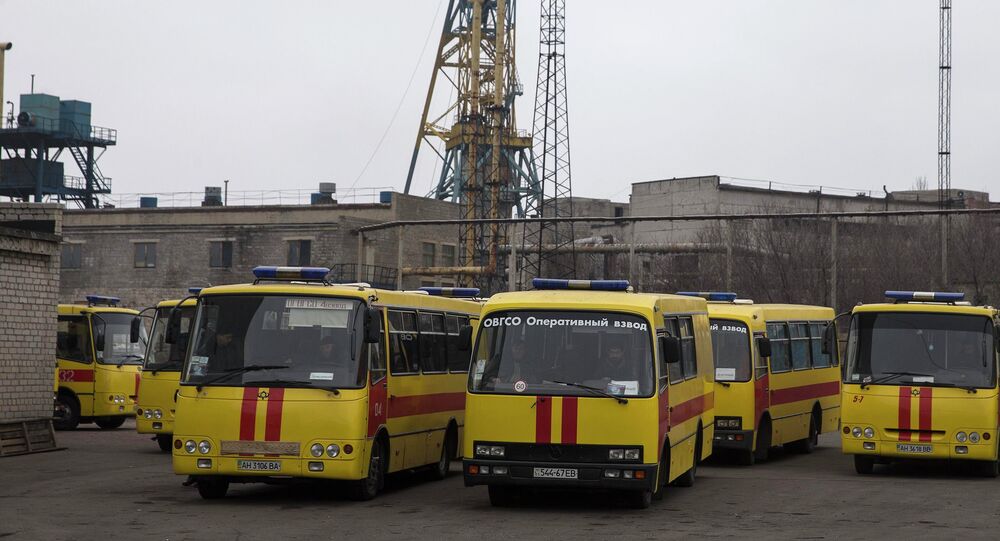 Officials from the self-proclaimed Donetsk People's Republic have launched a criminal investigation into the Zasyadko mine accident, which claimed the lives of at least 32 miners on Wednesday.

© Sputnik / Alexei Nikolsky
Russian EMERCOM Ready to Assist Ukraine in Zasyadko Mine Rescue Work
The Prosecutor's Office of the DPR announced in a press statement on Thursday that "a criminal case has been opened under article 248 of the DPR Criminal Code for 'Violation of mining operations, resulting in the deaths of two or more persons.'" Late on Wednesday evening, DPR prosecutors launched an investigation into the possible "violation of safety rules in work areas of heightened risk."

The People's Council of the DPR noted on its website that the mine had continued to operate despite a direct order from the DPR's leadership to close the mine. “The republic’s chief Alexander Zakharchenko signed a decree to stop work at this coalmine a month ago. However, the mine belongs to Ukraine, and its management ignored the official warning,” the statement read.

Speaking to Radio Sputnik from the scene on Wednesday, independent German journalist Mark Bartolmai noted that DPR authorities had warned the Zasyadko mine's owners to no avail about the mine's abysmal safety conditions.

© AFP 2021 / JOHN MACDOUGALL
Thursday Declared Day of Mourning in Ukraine for Victims of Zasyadko Mine Explosion
Safety violations are considered one of the main possible causes for the methane explosion which occurred at the mine on Wednesday morning. The mine is owned by Opposition Bloc MP Yukhym Zvyahilsky, an influential eastern Ukrainian businessman and former acting Prime Minister. Zvyahilsky, who was reelected to Ukraine's parliament in last October's parliamentary elections, factually represents just a part of the region's territory; the rest is controlled by DPR authorities.

Work at the mine has been shut down until experts can determine the cause of the accident. According to DPR emergency services, 230 miners were in the mine when the explosion took place.

Ukrainian authorities, despite being politically cut off from the mine, have launched their own investigation into the tragedy. A spokesman for Ukrainian President Petro Poroshenko announced that Thursday had been declared a day of mourning for those killed.

Shelling Cuts Power to Donbas Mine, 55 Workers Evacuated
The Zasyadko mine, one of Ukraine's largest coal mines, was established in 1958, named after Alexandr Zasyadko, a former Soviet Coal Industry Minister. In 1992, the mine was privatized. The mine has witnessed a number of deadly incidents over the past 15 years, with nearly 270 reported to have died in accidents since 1999. On November 18, 2007 a methane explosion killed 101 workers, becoming the worst mining accident in the history of independent Ukraine.

Since Kiev launched its military operation in Ukraine's southeast in April, 2014, the Zasyadko mine has been repeatedly shelled, causing power outages and the evacuations of its workers. Last November, a mine worker was killed by shelling. Since the beginning of the year, the mine has been evacuated at five times. In January, 500 miners were temporarily trapped underground after shelling cut the mine's power supply.