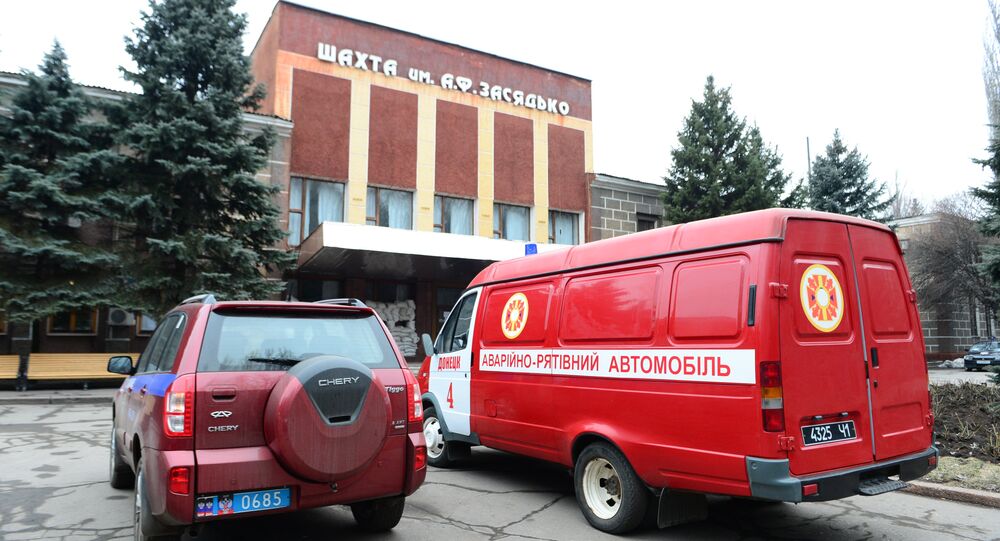 Death Toll in Donetsk Mine Rises to 24, Fate of 9 Unknown - DPR Officials

The Emergencies Ministry of the self-proclaimed Donetsk People's Republic confirmed on Wednesday that the death toll at a coal mine in eastern Ukraine had risen to 24 people.

DONETSK (Sputnik) — The death toll from the coal mine methane explosion in the self-proclaimed Donetsk People's Republic (DPR) in eastern Ukraine has risen to 24, regional Emergencies Ministry said.

"We confirm that we found 23 bodies, they are now being raised to the surface, the fate of nine others remains unknown,” the spokesperson of Emergencies Ministry told RIA Novosti.

Earlier death toll of 17 people was announced by local authorities.

"In the morning, the body of one deceased miner was brought to the surface. Another 15 people received injuries of varying severity. At the moment, out of the 32 people believed to have been trapped under the rubble in the mine, 16 showing no signs of life upon being recovered," Donetsk region Emercom representative Yuliyana Bedilo told media present at the scene.

The blast is reported to have taken place at a depth of 1,230 meters underground.

© AFP 2021 / JOHN MACDOUGALL
Death Toll in Donetsk Mine Rises to Five - Trade Union
According to the DPR authorities 230 workers were underground when the blast took place on Wednesday morning. Shortly after the start of a rescue operation, the DPR Emergencies Ministry found a body of a deceased miner.

Independent German journalist Mark Bartolmai spoke to Radio Sputnik from the scene Wednesday afternoon, noting that the mine is owned by Ukrainian businessmen from outside Donetsk, and that DPR authorities had warned the mine's owners to no avail about the mine's abysmal safety conditions.

"There are a lot of relatives waiting in front of the mine to find out something about the fates of their loved ones," Bartolmai noted, adding that the area around the mine remains surrounded by emergency vehicles. He noted that emergency services were doing their best to provide regular updates for relatives and journalists at the scene.

The Zasyadko mine, one of Ukraine's largest coal mines, was established in 1958. The mine has witnessed a number of deadly incidents, with over 230 reported to have died in accidents since 1999. On November 18, 2007 a methane explosion killed over 100 workers.

Officials have confirmed that this explosion was an accident, and not the result of shelling by Ukraine's armed forces. Since Kiev launched its military operation in Ukraine's southeast in April, 2014, the Zasyadko mine has been repeatedly shelled, causing power outages and resulting in the evacuation of workers. Last November, a mine worker was killed by shelling. Since the beginning of the year, the Zasyadko mine has been evacuated at five times. In January, 500 miners were trapped underground after shelling temporarily cut the mine's power supply.

Death Toll in Donetsk Mine Rises to Five - Trade Union

Bodies of Several Workers Found in East Ukraine Mine After Explosion

Mine Explosion in East Ukraine: Fate of 73 Miners Unknown