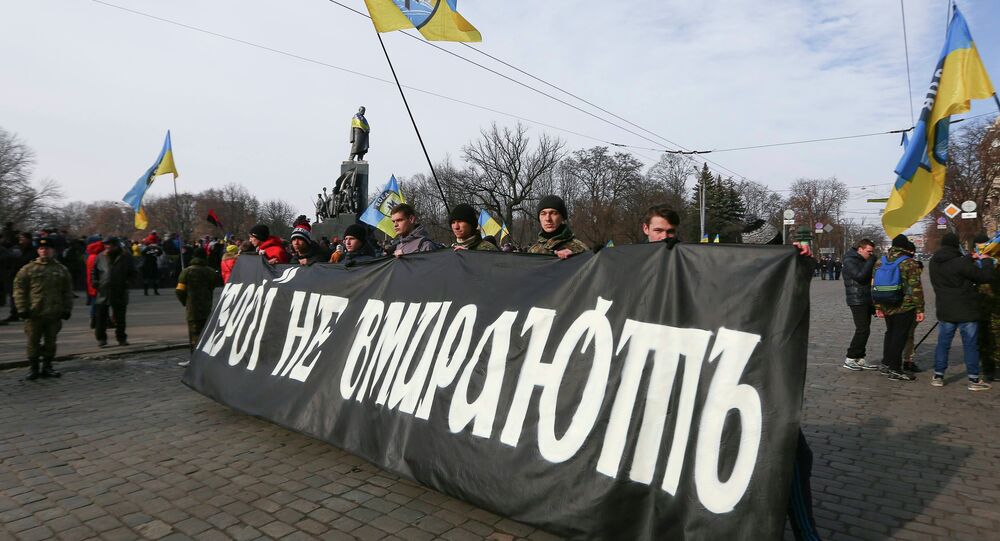 The commander of the "Azov" volunteer battalion and his driver crashed to their death in an off-road car retreating from the village of Shirokyne in the Donetsk Region of East Ukraine.

Alexander Maximenko
Ukrainian Azov Regiment Fighters Shown Posing With Portrait of Adolf Hitler
The car smashed into a monument built in the memory of the heroes of World War II. The memorial survived the hit and did not fall, but the two Ukrainian national security agents died on the spot.

On the last day before the armistice on February 14, the car crashed into a memorial to the heroes of World War II. Self-defense fighters considered the accident very symbolic.

Part of village is under the control of the self-defense forces, and the other part is controlled by the Ukrainian army. As a whole, the ceasefire in the village is being observed. However, localized shooting has taken place because not all fighters of Ukraine's National Guard have obeyed the orders of Petro Poroshenko.

© Sputnik / Evgeny Kotenko
Nationalist Aidar Unit Reorganized As Separate Assault Battalion of Ukraine's Army
“[We've seen] frequent provocations from their side, bombardments and shelling from the tanks and 120 mortars. The last shelling was yesterday, we didn’t respond, we sat out… They have two working tanks, they often hit apartment houses, which have no relation to military facilities,” one of the defenders of Shirokyne said.

The independent supporters of Donetsk People’s Republic have held the fort here without heavy weapons. The representatives of the Donetsk and Luhansk People's Republic reported that they had completed the withdrawal of artillery from the line of contact with the Ukrainian military in accordance with the plan approved by  military representatives of both parties and the agreement enshrined in the first paragraph of measures in observance with the Minsk agreements.

OSCE representatives  recorded the observance of the Minsk agreement by authorities of Donetsk People's Republic. International observers praised the steps of the DPR to ease the tensions in Donbas. As for the Ukraine's National Guard, the DPR's Ministry of Defense noted on February 28 that they had only withdrawn 15 percent of armaments from the contact line. According to the self-defense fighters, the National Guard has no hurry to perform  the agreement and had only partially removed their artillery.