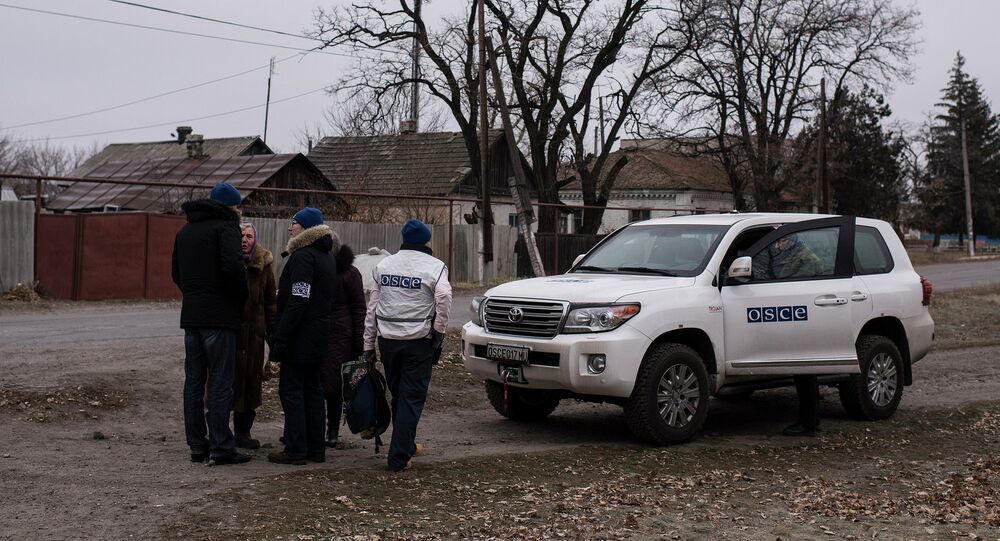 Ban Ki-moon and Federica Mogherini discussed the situation in Ukraine, particularly the strengthening of the OSCE Special Monitoring Mission.

BRUSSELS (Sputnik) – UN Secretary General Ban Ki-moon and EU foreign policy chief Federica Mogherini have held telephone talks discussing the situation in Ukraine, particularly the implementation of the Minsk peace agreements and the strengthening of the Special Monitoring Mission (SMM) of the Organization for Security and Co-operation in Europe (OSCE) deployed in the country.

"The Minsk agreements must be fully implemented, this is our common priority. The EU is already providing substantial practical and financial support to the OSCE mission. We are now working to increase our support to OSCE so that it can fully play its role on the ground," Mogherini said, as quoted by the European External Action Service (EEAS) on Tuesday.

Earlier in the day, top diplomats from Russia, France, Ukraine and Germany held three-hour talks in Paris for the first time since the Normandy Quartet summit held in the Belarusian capital, Minsk, on February 11-12.

© REUTERS / Francois Lenoir
Mogherini Sees ‘Grave Deterioration’ in Russia-EU Relations Over Mariupol
Ukrainian Foreign Minister Pavlo Klimkin said after the Paris meeting that the participants had agreed on "important technicalities" of supporting the OSCE monitoring mission in Ukraine, while French Foreign Minister Laurent Fabius stressed that the Normandy Quartet ministers had called for the provision of additional equipment and financing for the mission.

The peace agreements, signed in Minsk following 16-hour talks between Normandy Quartet leaders on February 12, stipulate that the implementation of all ceasefire measures aimed at ending the conflict in southeastern Ukraine is monitored by the OSCE. The measures, outlined in a 13-point document, include a ceasefire between Kiev forces and militia in Ukraine's southeast, the creation of a security zone through the withdrawal of heavy weaponry from the line of contact between the two sides and an all-for-all prisoner exchange.

The ceasefire came into force on February 15, however, the OSCE said in a Monday report that fighting between Kiev forces and independence supporters has continued in several parts of the Donetsk region.