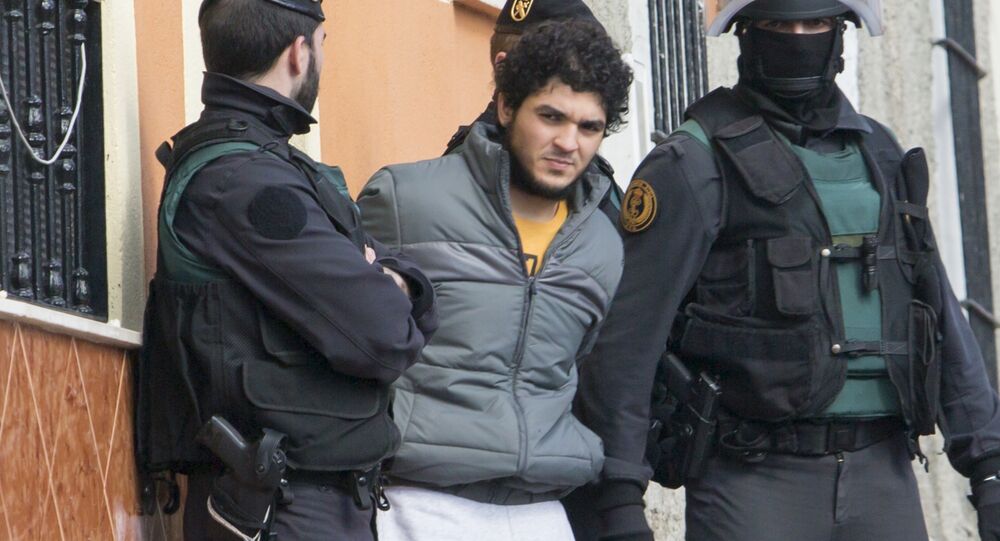 Two men suspected of running a ‘virtual community' to recruit young women to join Islamic State militants in the Middle East have been arrested in Europe.

They are two of four suspects to be taken into custody in Spain following a police operation to break up the online network — they were arrested in Melilla. Two more suspects were detained in Girona and Barcelona during a separate anti-terror operation.

Authorities in Spain are trying to ascertain if there are links between the two men in Melilla and those in Barcelona and Girona.

A statement from the interior ministry said the two arrested in Melilla were behind the creation and operation of several internet platforms spreading propaganda.

"They focused on the recruitment of women, who after a process of indoctrination, would end up joining the terrorist group in conflict zones", it said.

One suspect had a "multitude of subscribers" outside Spain — in Latin America, Morocco, Pakistan, Saudi Arabia, Tunisia, United States, Belgium, France and Turkey.

Melilla fence cost something like 33m euro to keep people out. What if we spent that money to help instead of repel? http://t.co/EDgKVWAoqL

In Britain, Keith Vaz, Chair of the Commons Home Affairs Committee has called for "closer co-operation" with Turkey to tackle the problem of people travelling through the country to Iraq and Syria.

Prime Minister David Cameron is urging airlines and internet companies to do more to stop radicalised teenagers going to the Middle East.

Meanwhile Scotland Yard in London has denied it took three days to tell officials in Turkey about three British schoolgirls who recently travelled to Syria to become 'jihadi brides'. The 15, 16 and 17-year-olds boarded a Turkish Airlines flights at Gatwick airport and flew to Istanbul on 17 February.

Turkey says 'the British' will be the only ones to blame if missing schoolgirls aren't found http://t.co/E6uDWvGfr5 pic.twitter.com/RskGaQm02w

Turkish Deputy PM Bulent Arinc said: "It is a condemnable act for Britain to let three girls come to Istanbul and then let us know three days later".

Mr. Arinc added, "It would be great if we can find them. But if we can't, it is not us who will be responsible, but the British".

"Once we established that the girls had travelled to Turkey, police made contact with the foreign liaison officer at the Turkish Embassy in London on Wednesday, 18 February. Since then we have been working closely with the Turkish authorities who are providing great assistance and support to our investigation."

Authorities in Spain estimate around 100 Spanish people have joined jihadist fighters in Iraq and Syria; in Britain it's thought to be around 600 people who have left to join Islamic State. In France, authorities believe it to be closer to 1,400.