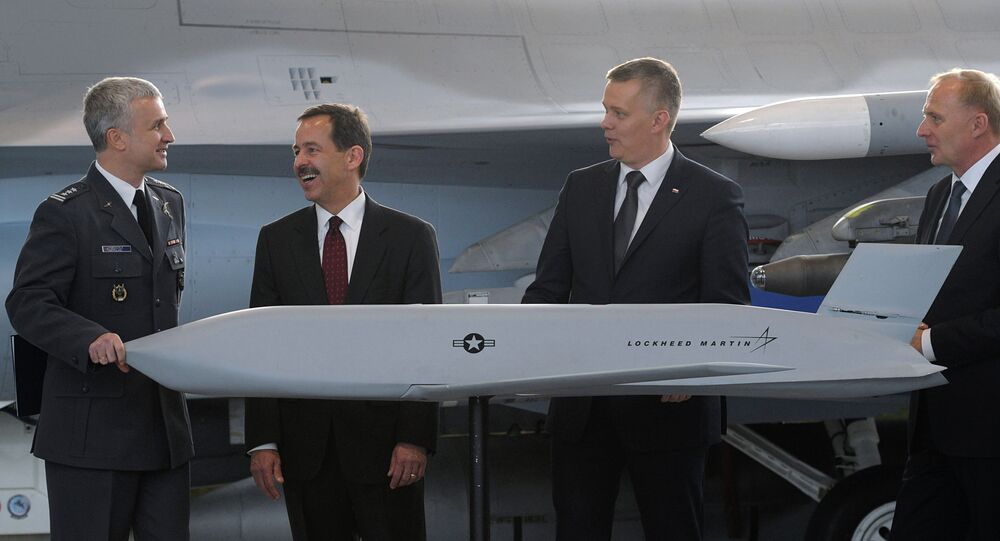 Poland is investing billions of dollars in game-changing military hardware, much of it supplied by Lockheed Martin, with ambitions to shift the balance of power in Eastern Europe.

© Photo : Konflikty.pl
Two Polish Warships Collide in Baltic Sea
Polish officials and experts have high hopes that a series of military programs aimed at beefing up Poland's missile-related capabilities will dramatically strengthen the country's projection power capability, even predicting that it will shift the balance of military power in Central Europe in Poland's favor.

The Polish Defense Ministry made a deal this past December with the US's Lockheed Martin to acquire at least 40 AGM-158 semi-stealth air-to-surface missiles with a range of 370 km for its F-16 fighter fleet. This, combined with plans to develop a 300 km range surface-to-surface rocket artillery system known as HOMAR with technology licensed from Lockheed Martin, plus plans to purchase a submarine-launched system of maneuverable rockets with a range of up to 800 km, will provide Poland with what political scientist Pawel Soroka calls a "Polish deterrent triad."

Speaking with Poland's Newseria news agency on Sunday, Soroka noted that the defense program would dramatically improve Poland's independent military capability. "NATO has a system of deterrence, at the head of which is the US. I think that on the one hand, we must be included into NATO's system of deterrence as an ally, but on the other hand, we must also have autonomous capabilities." Soroka noted that the system would increase Poland's options for independent action in times of crisis.

© AP Photo / Alik Keplicz
Paranoia and Propaganda Dominate Poland’s New National Security Strategy
Moreover, in Soroka's words, "along with the new hardware will come new opportunities, for example, the submarine-based landing of special forces." The planned fleet of three new submarines, expected to cost over $2.03 billion, is expected to allow them to attack ground targets hundreds of kilometers from the Baltic coast using maneuverable ship-to-surface missiles, a capability Poland would be alone in possessing among its Central and Eastern European NATO partners.

The air, ground and ship-based conventional missile systems are part of a $42.4 billion military modernization program up to 2022 dubbed "Polish Claws" by Prime Minister Donald Tusk, which includes a $9 billion air and missile defense system known as "Polish Shield".

Amidst rising tensions on its eastern European borders and ever-increasing NATO encroachment, Russia's new military doctrine, adopted late last year, singles out NATO as a main strategic threat to the country's security. The new doctrine has seen with it the speeding up of the country's 2020 military modernization program, with new and modernized equipment entering service into all four branches of military. In 2014 alone, the army received two new brigades of Iskander M-based tactical rocket systems, while three new rocket forces regiments were outfitted with the RS-24 Yars ICBM.

© AFP 2020 / PETRAS MALUKAS
Ukraine Signs Agreement to Create Military Brigade With Poland, Lithuania
Responding to the increasingly belligerent defense posture by NATO's eastern outposts, former Deputy Defense Minister General Yuri Baluyevsky recently noted that the representatives of these countries' political leaders seem to "have forgotten that while our strategic rockets would hypothetically 'fly over' their territory, medium and short range rockets would be aimed at their [territory]." Baluyevsky notes that he hopes that remembering this fact "will cool the heads of the leaders of these countries."
...
Reddit
Google+
Blogger
Pinterest
StumbleUpon
Telegram
WhatsApp
1320