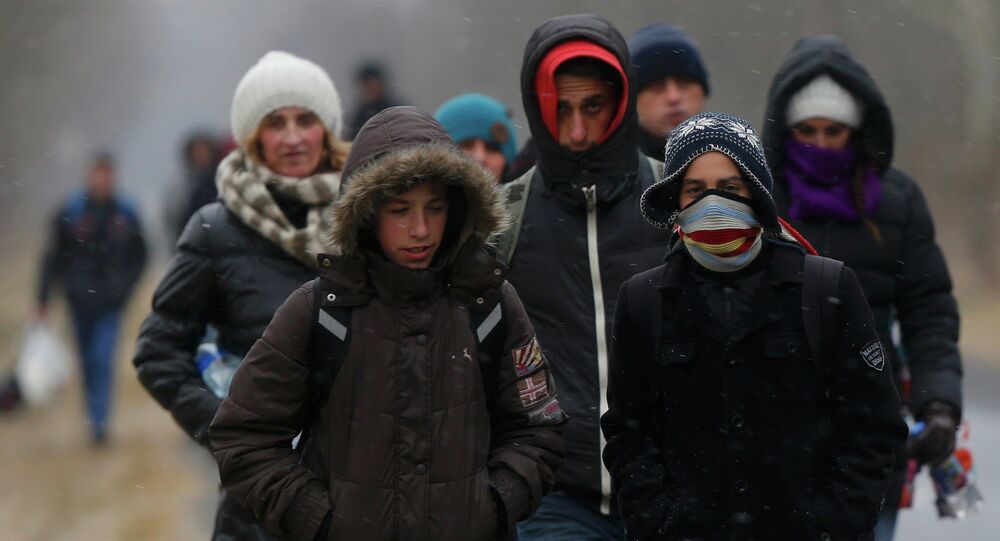 Kosovo marked the anniversary of independence in a muted manner this year, as mass immigration, extreme poverty and a deadlocked political and legal system rife with corruption leave many Kosovars feeling there is little to celebrate.

© Sputnik / Natalya Grebenyuk
Serbia Says Few Displaced From Kosovo Able to Return
The seventh anniversary of Kosovo's unilateral declaration of independence from Serbia was marked in somber fashion, a fact which even the breakaway territory's international benefactors haven't been able to conceal.

Apart from commemoration ceremonies to the republic's first president, ceremonies at the graves of those killed in the war in the late 1990s, and a public concert, the capital of Pristina held no state-funded celebrations, Mayor Spend Ahmeti stating that "there is no money" for such events.

Over the last year, tens of thousands of Albanians have fled the region due to increasingly difficult conditions at home, up to 50,000 leaving since December alone. With the majority heading for the countries of the European Union, things have gotten so bad that Germany and Austria have deployed special border control agents at the Hungarian-Serbian border in order to try and stem the flow, Italy's ANSA explains. It is expected that most of the estimated 20,000 heading for Germany will be deported home following quarantine.

© Sputnik / Natalya Grebenyuk
Kosovo Loses Its People: Thousands Run Away in Search for Better Life
Extreme poverty, explosive crime and a deadlocked political and legal system rife with corruption have fueled the exodus from the self-declared state. At least a third of the region's working age population is unemployed, including over 55 percent of youth, and an estimated 500,000 of the area's 1.8 million population lives on less than $2 a day.

"I am so disappointed with my own place, I just want to leave," a man named Bislim told AP. His brother Mirsad, supportive of Bislim's decision, added that "they just want to get out of this filthy place." Another man, a young engineer named Fatos, told Radio Free Europe that "there is no chance for to get a job because everything here depends on having influential connections."

Political analyst Dukagjin Gorani told AP that among the main cause of the present calamity is that the Kosovo Liberation Army officers who have since taken up top positions have "systematically robbed and enslaved in the name of liberation."

© AFP 2020 / ARMEND NIMANI
Police Use Tear Gas to Disperse Rally Urging Kosovo's Minister to Resign
Commenting on the dire situation, Serbian Labor Minister Alexandar Vulin noted that the territory suffered because it has "no property or economic security, or social policy," with several "clans determining their destiny," Serbia's BETA news agency quoted him as saying. He noted that "you cannot, only because of the fact somebody recognized you as something, become a state. That's not how a state is made."

Serbia and Kosovo saw a normalization of relations in April 2013 under a EU-negotiated deal, although Serbia, along with over 80 countries around the world, continues to reject the territory's claim to independence. A 78-day NATO bombing campaign forced Serbia to surrender the region in 1999 following a bloody war between Serbian military and Albanian separatists which led to the deaths of over 13,000 people.