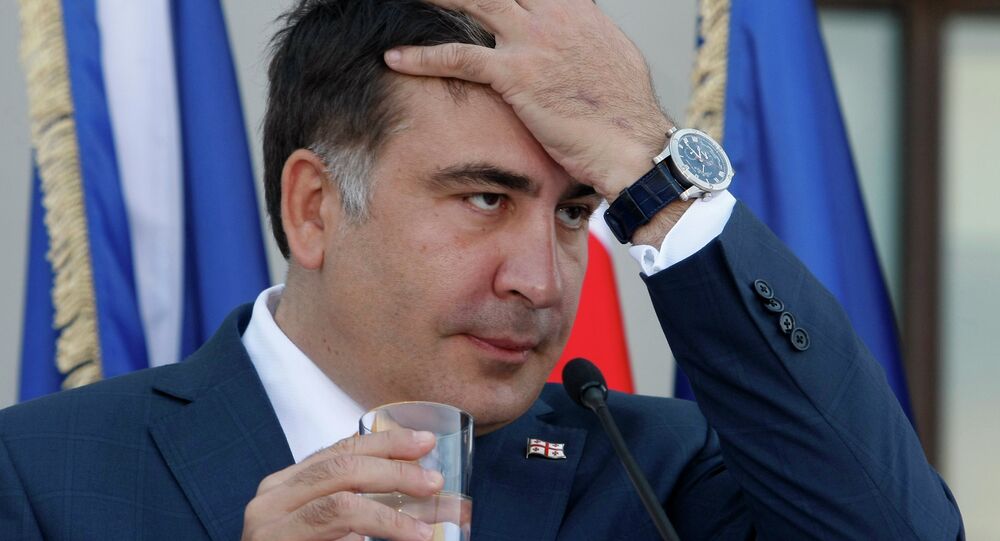 President Poroshenko has appointed former Georgian leader Mikheil Saakashvili to represent Ukraine abroad, explaining that he wants to harness the ex-Georgian president’s "knowledge, experience and unique know-how" in order to improve the image of his country; however, it's worth it to take a closer look at Saakashvili.

The Ukrainian leader praised his personal qualities and work experience.

"For a long time, we've been thinking about how to use the knowledge, experience and unique know-how of Mikheil Saakashvili in the best way,” the president's press service quoted Poroshenko as saying last Friday.

© Photo : BBC screenshot
Saakashvili chewing his tie as he waited for a BBC interview.

Poroshenko is confident that Kiev-educated Saakashvili will establish bilateral communication between Ukraine and the rest of the world, improving the image of county. But will he really?

Who Is Mikhail Saakashvili?

Saakashvili was elected president of Georgia in 2004 after an uprising that toppled his predecessor, Eduard Shevardnadze. He headed Georgia from 2004 to 2013.

During his years in power, a document entitled Mikheil Saakashvili: A Psychological Study of the Character was circulated among Western journalists.

The paper is still available online; it was prepared by researchers at eight European institutes and universities. It describes Saakashvili's behavior as “narcissistic, paranoid, egocentric and hysterical" with signs of "psychiatric disturbances".

A look at the Georgian leader's career confirms the spirit of this clinical observation.

His gaffes include an incident where he chewed his tie while waiting for a BBC interview to begin back in 2008. He took a call on his cell phone, absentmindedly stuffing the end of his red silk tie in his mouth and beginning to chew it after suffering an apparent attack of nerves.

What he apparently did not know was that the cameras were already rolling and the BBC would broadcast the footage, joking that the Georgian leader was chewing over his next move.

The video went viral on the internet.

The president suffered from another panic attack in 2008, when he was spooked by an imaginary noise that he believed was a Russian airplane, which forced him to run away in panic during his half-finished interview.

In 2013, Saakashvili was barred from seeking another presidential term in Georgia and left for the United States to pursue a lecturing career at Tufts University.

In summer 2014, the Georgian Prosecutor General's Office accused him in absentia of several criminal acts.

The criminal cases the former president might be questioned on include murder, embezzlement, illegal seizure of assets, misappropriation of funds by the state security service, a police raid on an independent broadcaster, and more.

Ukraine however remains dedicated to the idea of hiring this “narcissistic, paranoid, egocentric and hysterical” politician, and to use his personal know-how to establish ties with the rest of the world.

And, basically, how to stay afloat regardless of all the above.