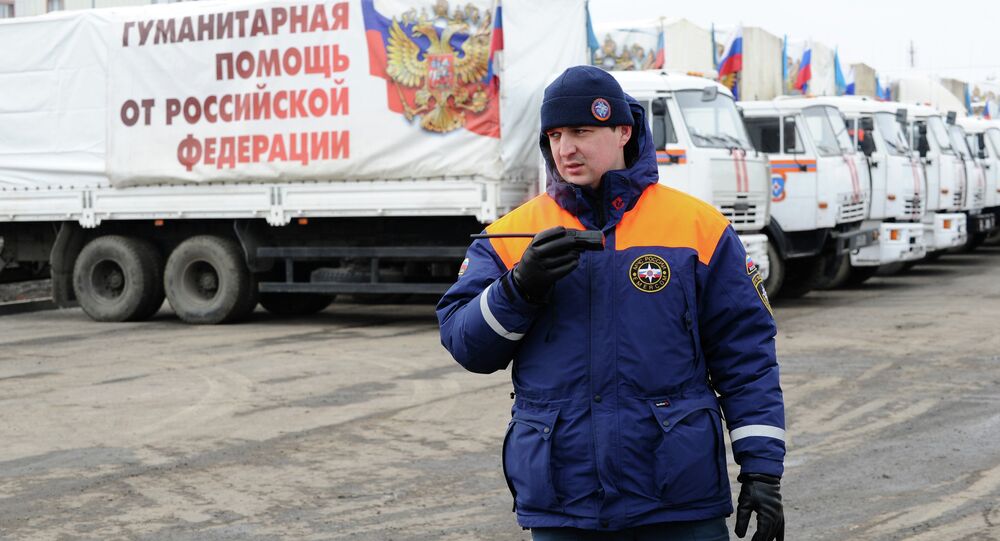 Russian Emergencies Ministry announces that yet another Russian humanitarian convoy has successfully delivered aid to the crisis-torn Donbas, and all vehicles have returned to Russia.

MOSCOW (Sputnik) – Yet another Russian humanitarian convoy has successfully delivered aid to the crisis-torn Donbas (Ukraine's southeastern regions), and all vehicles have returned to Russia, a representative of the Russian Emergencies Ministry has announced.

"All cargo has been delivered and will be distributed in the coming days," Oleg Voronov, deputy chief of the crisis management center with the Russian Emergencies Ministry, told journalists Sunday, adding that part of the aid will go to schools, kindergartens and hospitals.

The unloading of the convoy trucks was monitored by representatives from the Organization for Security and Co-operation in Europe (OSCE). Ukrainian customs officers inspected the convoy when it crossed the border into and out of Ukraine. No complaints were filed.

According to the UN High Commissioner for Refugees (UNHCR), the Ukrainian government's regulations impeding access to Donbas are undermining humanitarian agencies' ability to help people who are suffering as a result of the ongoing conflict in the country.

Russia has been sending humanitarian aid convoys to Donbas since August. According to the Russian Emergencies Ministry, the 14th convoy is scheduled to go to the region on February 15.