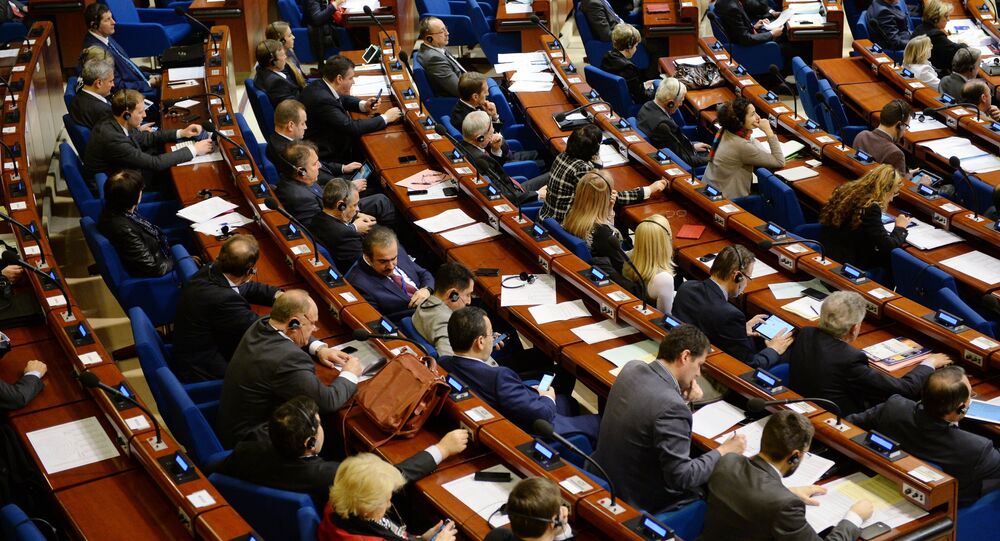 PACE delegates were left confused after the Russian delegation left the forum as a response to a suspension of their voting rights until April.

© Sputnik / Vladimir Fedorenko
PACE Deprives Russia of Voting Rights Until April, Russian Delegation Suspends Membership for One Year
MOSCOW, January 30 (Sputnik) — Legislators at the Parliamentary Assembly of the Council of Europe (PACE) were left confused as the Russian party left the session after a suspension of its voting rights.

"The day after the vote, we were confronted with the consequences of our 'brilliant' decision," one legislator told Sputnik, saying that he considers the resolution to deprive Russia of voting rights "blunt foolishness."

As a result of the decision, Russia's delegation has left PACE and will no longer participate in discussions on renewing Russia's voting rights in the organization. According to PACE President Anne Brasseur, a reversal of the decision will depend on fulfilling all points of the resolution, which means "troop withdrawal from Transnistria, return of Crimea, progress in resolving the situation in Nagorno-Karabakh, release of Savchenko within 24 hours" and other acts.

© Sputnik / Vladimir Fedorenko
PACE to Cancel Restrictions for Russia If Progress on Ukraine Achieved
The British and Ukrainian delegations reacted to the result of the resolution positively and continued to discuss the situation even after the Russian delegation had left. However, the other delegates were confused by the result.

"The resolution demands so much, it's incredible, I wanted to discuss it with the delegation, but it already left," another legislator said.

On Wednesday, before PACE’s decision, Pushkov said that the delegation will ask Russian investigative bodies to allow the Assembly’s representative to meet with Ukrainian pilot Nadezhda Savchenko detained in Russia as a suspected accomplice in the killing of two Russian journalists. However, he stated that Russia will go ahead with the move only if the delegation remains in PACE.

However, PACE adopted a resolution that deprived the Russian delegation of voting rights in the organization and canceled its participation in the work of the Council of Europe until at least its April session, accusing Moscow of participating in the military conflict in the southeast of Ukraine, which Russia has repeatedly denied.

In response to PACE’s decision, the head of the Russian delegation Alexei Pushkov said that Russia is suspending its work in PACE until the end of the year.

PACE suspended the Russian delegation's voting rights for the first time back in spring 2014, in response to Russia's reunification with Crimea.