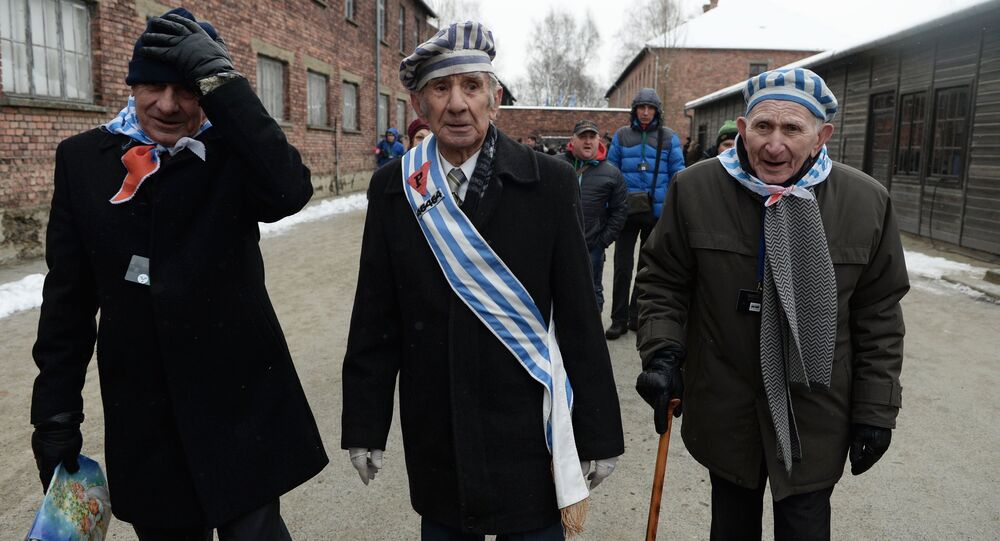 Approximately 1.1 million people, overwhelmingly Jews, are believed to have been killed in Auschwitz from June 1940 until January 1945.

"I'll do it for as long as I can," Renee Salt, 85, one of the survivors, who came to Auschwitz this year, told BBC. "Why? There are still a lot of Holocaust deniers, the world over, and if we don't speak out, the world won't know what happened."

Salt could not return to the death camp for half a century. "The first time I went was ten years ago. It was terribly difficult, but after that I was pleased that I went — I buried the ghosts," the woman said, adding she was among the "lucky ones, who survived when so many did not."

Although estimates differ greatly, approximately 1.1 million people, overwhelmingly Jews, are believed to have been killed in Auschwitz-Birkenau, located near the Polish town of Oswiecim, from June 1940 until January 1945. It total, some 6 million Jews became the victims of Holocaust.

In 1947, Auschwitz was turned into a museum that in 1979 was designated as a UNESCO World Heritage Site. Since 2005, a series of high-level events, called International "Let My People Live!" forums, have been held to research World War II and to preserve the memory of the horrors of the Holocaust.

World leaders, including presidents of Poland, France, Germany and Ukraine, will take part in the events held on Tuesday. The US delegation is led by Treasury Secretary Jack Lew. Sergei Ivanov, presidential chief of staff, heads the Russian delegation.

This year, memorial events include the laying of a wreath, a church service and a candlelit ceremony, according to BBC.

Ceremony held now in Oswiecim, town with #Aushwitz camp on its doorstep. Speaker says "this must never happen again" pic.twitter.com/3KNOTqelPy

"Last night sleeping… here, I had a horrible dream and woke up and looked out the window and sort of thought that I was back in Birkenau in cell block 14 where I started in 1942," said survivor David Wisnia, 88, as quoted by AFP.

Wisnia, who was a choir boy at Warsaw’s Great Synagogue before it was destroyed by the Nazis in 1943, will sing a prayer in Hebrew later on Tuesday.
The commemoration comes at a time when anti-Semitic violence is on the rise in Europe. According to data presented by the Representative Council of French Jewish Institutions (CRIF), the main Jewish group in France, anti-Semitic violence in the country spiked last year. More than 850 anti-Semitic acts took place in France in 2014, compared to 423 in 2013.

With anti-semitic crime across Europe increasing, its time those involved were shown the full force of the law. #HolocaustMemorialDay

"These anti-Semitic acts represent 51 percent of racist acts committed in France while Jews make up only one percent of the French population," CRIF said in a statement, as quoted by AFP.

In early January, an Islamist gunman took several people hostage at a Jewish supermarket in Paris, killing four of them. The attack took place two days after an assault on Charlie Hebdo, a French satirical weekly, left 11 people killed.

No one wanted to be associated with anti-Semitism shortly after World War II, said Ronald Lauder, president of the World Jewish Congress, according to the Independent. "But, as the Holocaust grows more distant and survivors disappear, extremists grow more bold in targeting Jews. Stoked by a false narrative that blames Israel for a litany of the world's problems, anti-Semitism is resurgent and deadly," he explained, as quoted by the newspaper.

LestWeForget #HolocaustMemorialDay. #antisemitism could be the next holocaust-should recall history & put an end to this present day horror.