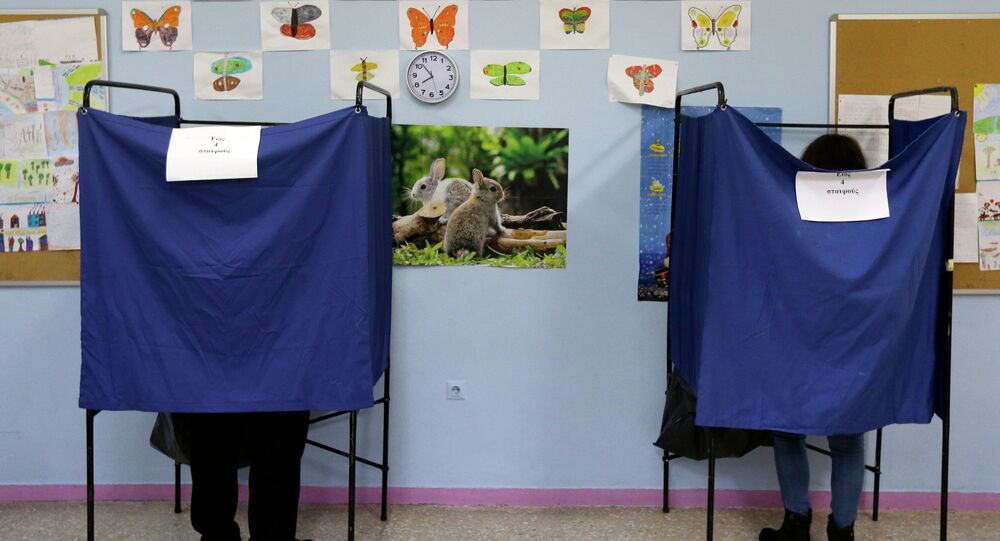 Greeks Head to Polls While Europe Holds Its Breath

Polling stations have opened in Greece on Sunday as the country votes in snap parliamentary election which could bring the radical left party Syriza to power - the first anti-austerity party in the Eurozone.

© Sputnik / Vladimir Rodionov
Greece to Hold General Elections on January 25
MOSCOW, January 25 (Sputnik) — Greeks are heading to polling stations on Sunday to vote in the parliamentary election and decide on the country’s financial future.

According to recent polls, the left-wing Greek Syriza party, which was originally established as a coalition of left-wing parties in 2004 and became a party in its own right in 2012, is likely to win the upcoming election. It is currently six percent ahead of the incumbent New Democracy party in opinion polls.

Syriza's projected victory on Sunday would be a historic moment for the country, as the party has vowed to end harsh austerity measures, which wielded deep cuts in public spending and caused plummeting living standards, and negotiate more favorable terms for Athens.

Ever since the country accepted bailouts worth about $270 billion  to service bad loans to European banks the country has had to accept deep cuts in spending – a practice known as austerity and promoted by European politicians as a way to get Europe’s sagging economy back on track.

Syriza leader Alexis Tsipras has urged his voters to win his party 40 percent of the vote, which would allow him to form a government with no help from other parties.

In order to win parliamentary seats, each party is required to break the three-percent threshold. In total, there are 300 parliamentary seats, 250 of them are to be distributed through proportional representation and another 50 will be given to a party that wins a majority.at wielded deep cuts in public spending and caused plummeting living standards

The polls, however, also showed a significant portion of voters were undecided two days before the vote.

The three strongest-performing parties each have three days to try and form a coalition government to prevent a second election from being called within a month.

Some 9.8 million Greeks are eligible to vote. 19 ballot stations have opened across the country. The polling stations close at 1700 GMT.

Under the Greek constitution, voting is an obligatory procedure for each citizen. A voter not coming to the elections without a good reason might be subject to an imprisonment up to one year.