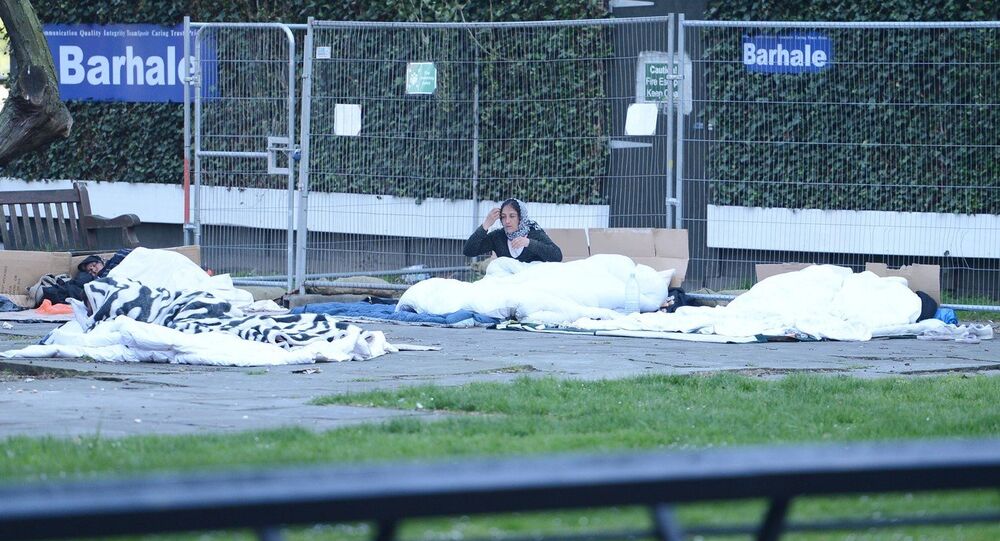 © AFP 2021 / PAUL ELLIS
British High Court Reverses Automatic Ban on Roma, Travellers
MOSCOW, January 23 (Sputnik), Anastasia Levchenko — Roma people seeking to set up camps in areas of the UK, including on Green Belt land, are "vilified" and discriminated against by local members of parliament and councilors, the chairman of the UK Gypsy Council told Sputnik Friday.

"Mr. Pickles has succumbed to the peer pressures of MP John Baron [MP for Basildon and Billericay] and other local MPs and councilors, who feel it is okay to dogmatize and vilify a nation of people, who have been constantly pushed out on the periphery of society, through the failures of those in local political positions to… provide accommodation," Gypsy Council Chairman Joseph P. Jones told Sputnik Friday.

Pickles is "institutionally [and] politically brainwashed by those who have those [discriminatory] tendencies, those who are in local governments," Jones added.

© East News / Eyevine
UK Residents Fear Gypsy Stampede After Court Reverses Greenfield Site Rules
The court ruled that the secretary of state for communities and local government had violated the rights of the Roma by "recovering" settlement applications made by members of the minority group.

In 2013, Eric Pickles launched a policy of reviewing and rejecting gypsies' bids to reside in the Green Belt.

"In broad terms, the SSCLG has taken steps to recover planning appeals … where they relate to proposals for pitches, whether occupied by one or more caravans, within the Green Belt… from the latter part of 2013, and did so until September 2014," Justice Gilbart said in the ruling.

The case against SSCLG was brought by claimants Charmaine Moore and Sarah Coates, residents of Green Belt areas outside London and Kent and members of the Roma gypsy community. They accused the government of intentional delays in recovering their planning appeals, which they claimed amounts to "unlawful indirect discrimination."

© AFP 2021 / POOL / JUSTIN TALLIS
UK Jewish Leadership Warns of Possible Reemergence of Anti-Semitism
"The Gypsy/Traveller population has constantly… heard those in power saying this is not the right place for your type. But we never seem to get any directions to a place that is," the chairman of the Gypsy Council told Sputnik.

The United Kingdom's so-called Green Belt policy is aimed to prevent the spread of urbanization by limiting developments on agricultural land, forests and other open spaces around metropolitan areas across the country. According to the Department for Communities and Local Government, Green Belt areas constitute around 13 percent of England's land mass.

At the same time, Planning Minister Brandon Lewis claims that the policy to safeguard the Green Belt is non-discriminatory and relates to any planning applicants.

"This Government makes no apologies for seeking to safeguard Green Belt protection and trying to bring a sense of fair play to the planning system. The Government's planning policy is clear that both temporary and permanent traveller sites are inappropriate development in the Green Belt. Today's judgment does not question that principle," Lewis said in a statement on Thursday.