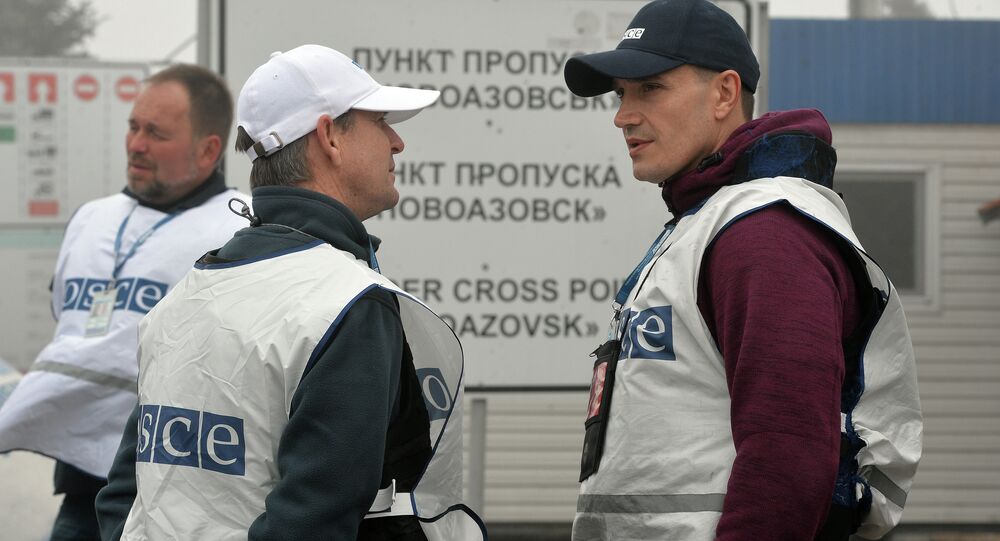 OSCE based at two checkpoints at the Russian-Ukrainian border reported no movement of military equipment, according to the observers' statement.

MOSCOW, January 22 (Sputnik) – Observers from the Organization for Security and Co-operation in Europe (OSCE) based at two border crossing points at the Russian-Ukrainian border have reported there has been no movement of military equipment over the border, the OSCE Observer Mission at Russian Checkpoints Gukovo and Donetsk said Thursday in a press release.

“At the two BCPs the OM did not observe military movement, apart from vehicles of the Russian Federation border guard service,” the press release said.

© Sputnik / Igor Maslov
Donetsk Militia to Move Front Line Away From City to Avoid Shelling by Kiev
Weekly updates from the OSCE Observer Mission are based on information received before 10:00 local time (GMT 15:00) January 21.

The OSCE said that during the last week, both checkpoints were calm and “regular local and long-distance bus connections continued to operate between the Luhansk region and cities in the Russian Federation.” Over the reporting period monitors observed 493 women and men dressed in military-style crossing the border from both sides.

On Monday, Ukraine's National Security and Defense Council claimed that two Russian tactical battalion groups had crossed the Russian-Ukrainian border. Russian Defense Ministry spokesperson called Kiev’s announcement “absolute rubbish.” He added that Ukraine's attempt to accuse Russia of invasion on the eve of the Davos Economic Forum is an attempt to sell "a pig in a poke" to financial donors.

Since the beginning of an armed conflict in southeastern Ukraine, Kiev repeatedly accused Russia of providing troops and weapons to independence supporters of Donbas. Russia has repeatedly denied these claims.