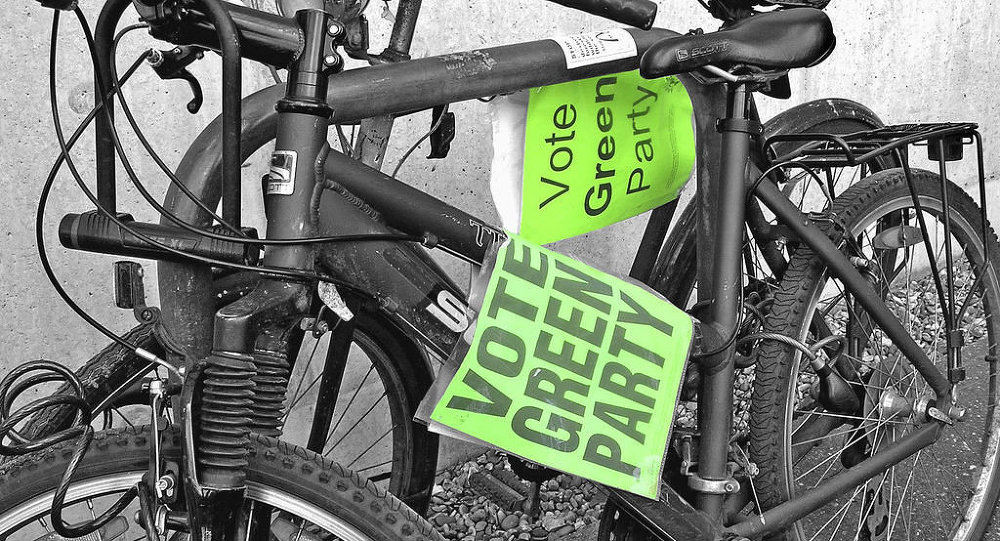 The Green government, if elected, will also prohibit British sports teams to play with rivals from dictator-ruled countries, curb the propaganda of "unsustainable consumption", and promote vegetarianism.

MOSCOW, January 20 (Sputnik) — If elected, UK's Green party will decriminalize cannabis and prostitution in the United Kingdom, superstars will pay levies to local performers to encourage the Arts and UK soccer teams will cease playing against countries with dictatorships, according to a party manifesto.

With less than four months until the next general election, the Greens are campaigning to extend their support, now standing at 11 percent, according to a Lord Ashcroft poll.

The party's far-left-leaning statement, titled "Policies for a Sustainable Society," details the Green party's wish to reclaim the country's values from capitalism and wealth for its own sake, and to assist in the birth of a "healthy society," based on voluntary cooperation.

The Green government, if elected, will significantly boost social spending using funds from a raft of new taxes, and sees long-term plans for Britain to leave the free trade bloc and become what its critics call a "negative growth economy."

The official policy, adopted at the party's annual conference, explains that UK Greens regard economic growth without social responsibility as an unsustainable socio-economic "race to the bottom." The party advocates for zero or negative growth based on sharing to "achieve an equitable distribution" of resources and wealth.

The manifesto details plans to scrap jobseekers' allowances in favor of a non-conditional "citizen's income" of 71 pounds (over $107) per week for very person of working age, as well as a substantial boost in social benefits.

© Flickr / Leo Reynolds
UK Green Party Questions UK Environment Agency Eco-Unfriendly Investments
To support this economy, the Green party intends to introduce new taxes, specifically "eco-taxes" based on environmental damage caused by the production and distribution of goods. A similar tax would apply to European imports, and, if implemented, could signal the end of Britain's membership in the EU free trade association.

The Greens want to legalize the cultivation and trade of cannabis, and allow small-scale possession of several categories of drugs for personal use. They also intend to increase taxes on alcohol and tobacco. Under the Green policy, all forms of sex, including those for payment, between consenting adults will be decriminalized.

In the cultural sphere, the Green manifesto envisages "a tax on superstar performances" to raise funds for local cultural events. The BBC would apportion a larger share of prime-time to educational programs. British sports teams would be prohibited from competing with teams from countries where governments are deemed to be uncapable of maintaining "friendly" diplomatic relations.

LOL at the Green Party's ridiculous plans for Britain. Are they sure compulsory daisy chain making isn't on the list as well? #GreenParty

A Green government would also guarantee local ownership of the media. The amount of adverts on TV and in newspapers would be reduced to curb the propaganda of "unsustainable consumption." UK citizens would be encouraged to stop eating meat through incentives for plant-based diets.

In its foreign policy, the Greens condemn the use of what they call the "extremely loaded" term of "terrorism" against movements by governments that, the UK party says, seek to justify their own "monopoly for violence". The Green party seeks a deeper understanding what causes the "desperate motivations" that lie behind such violent acts, and to heal them without resorting to the same violence.

The Green say that by taking these steps they aim to create a "just, equitable and sustainable society," according to the manifesto. The party hopes to win three seats in the UK parliament in the elections, scheduled for May 7, 2015.