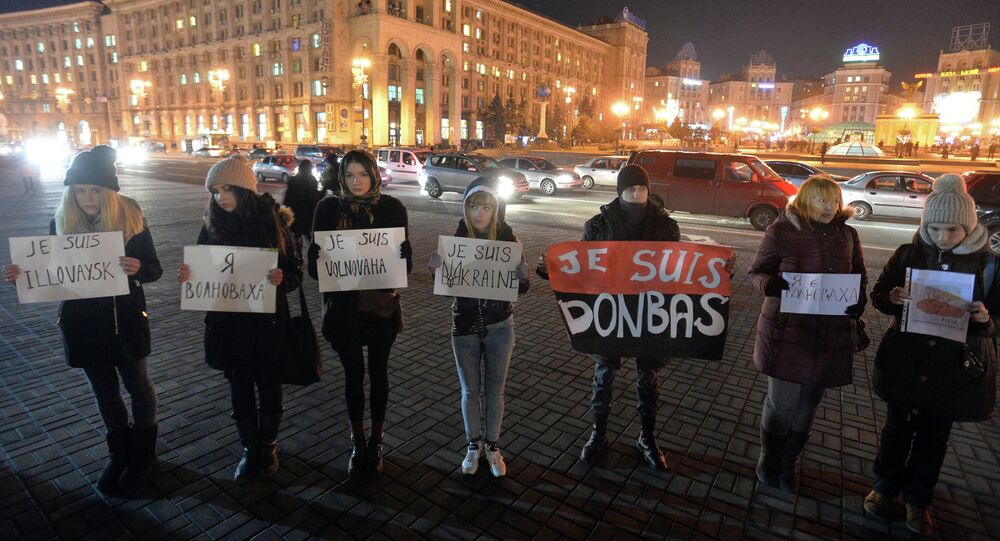 Facebook activists plan to hold a unity march in Kiev on Sunday to commemorate the people killed in a recent bus attack in eastern Ukraine.

KIEV, January 18 (Sputnik) – A unity march will be organized in Kiev on Sunday to commemorate the people killed in a recent bus attack in eastern Ukraine, with Facebook activists calling on people to organize similar events in other cities.

"On January 18, Sunday, Moscow and other cities will support the people of Ukraine. On this day in Kiev, in Independence Square (Maidan), a march will be held," a message on one of the Facebook even pages says, adding that the rally is planned to start at around 14:00 local time (12:00 GMT).

Several event pages titled "Je Suis Volnovakha" ("I am Volnovakha") have appeared on Facebook, calling on people to march out in solidarity with the victims of the bus attack, which occurred on January 13 near the government-controlled town of Volnovakha in eastern Ukraine.

© AFP 2020 / ALEXANDER GAYUK
OSCE Data on Bus Attack in Eastern Ukraine Contradicts Kiev Claim of Militia’s Involvement
The title of the events is reminiscent of the "Je Suis Charlie" ("I am Charlie") slogan that has been used to express support for the 12 journalists of the Charlie Hebdo satirical magazine who were killed in a recent terrorist attack on its Paris office.

The Volnovakha bus attack took the lives of 12 people, injuring at least 17 others.

On Saturday, the OSCE released a report with the results of its investigation into the incident that found that the rockets which hit the bus were fired from a north-north-eastern direction.

Kiev had claimed that the bus was hit by rockets fired from the east, from the direction of a town where local independence fighters were allegedly present at the time.

The authorities of the self-proclaimed people's republic of Donetsk (DPR) have stressed they were not involved in the attack.

On Friday, the OSCE Special Monitoring Mission (SMM) in Ukraine confirmed that Kiev forces and DPR have agreed on the launch of a joint inquiry into the attack.