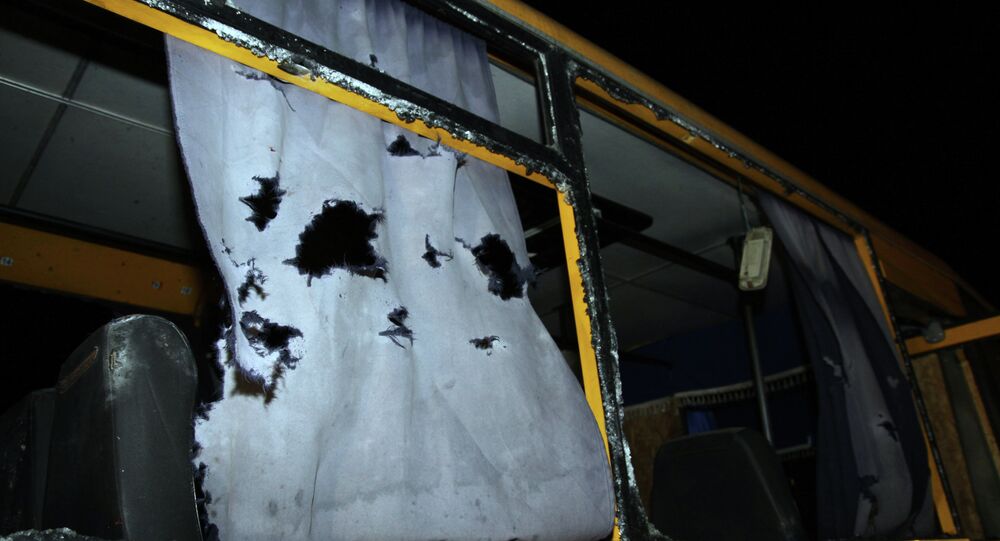 Russian Ambassador to the OSCE, Andrei Kelin said that Information obtained by the organization on the recent bus attack in the Donetsk region does not prove Kiev's claims that the bus was hit by a rocket fired by local militia.

MOSCOW, January 18 (Sputnik) – Information obtained by the Organization for Security and Co-operation in Europe (OSCE) on the recent bus attack in the Donetsk region that killed 12 people does not prove Kiev's claims that the bus was hit by a rocket fired by local militia, Russian Ambassador to the OSCE, Andrei Kelin, says.

Kelin told RIA Novosti Saturday that the OSCE assessment "points to discrepancy with the previous [Kiev's] version" and highlights "the necessity of a most thorough investigation of who is actually responsible for the death of people" in the January 13 bus attack near the town of Volnovakha.

Earlier on Saturday, the OSCE released a report with the results of its "third fact-finding patrol to government-controlled Volnovakha".

© AFP 2020 / ALEXANDER GAYUK
OSCE SMM Confirms Start of Joint Eastern Ukraine Bus Attack Investigation
"The investigation included comprehensive crater analysis of two specific blast craters, including the crater located 10 metres [98 feet] from the side of the passenger bus. In the SMM's [Special Monitoring Mission's] assessment all craters examined were caused by rockets fired from a north — north-eastern direction," the OSCE said in the report.

Meanwhile, according to Kelin, Kiev had claimed that the bus was hit by rockets fired from the east, from the direction of a town where local independence fighters were allegedly present at the time.

The authorities of the self-proclaimed people's republic of Donetsk (DPR) have stressed they were not involved in the attack.

On Friday, the OSCE Special Monitoring Mission (SMM) in Ukraine confirmed that Kiev forces and DPR have agreed on the launch of a joint inquiry into the attack.

The incident took the lives of 12 people and injured at least 17 others.

The UN Security Council has condemned the attack and called for an impartial investigation into the case.