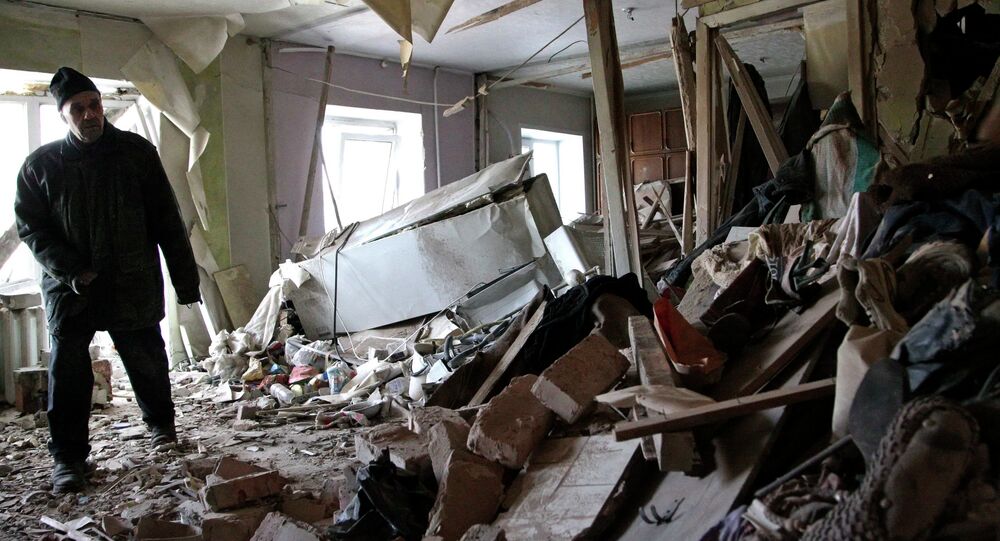 Ukrainian armed forces fired more than 30 rounds from various weapons on the outskirts of Donetsk, Gorlovka, a number of towns and villages in the Donetsk people's republic (DPR) overnight, according to DPR Defense Ministry's press service.

"Ukrainian forces fired more than 30 rounds from various weapons on the outskirts of Donetsk, Gorlovka, a number of towns and villages in the republic, as well as our positions at Donetsk airport," the agency said citing DPR Defense Ministry's press service.

According to reports, the Ukrainian armed forces made efforts to utilize subversive groups.

© Sputnik / Gennady Dubovoy
Kiev Troops Have Left Donetsk Airport: DPR Defense Ministry
"There were AFU [Armed Forces of Ukraine] attempts to deploy their small raiding forces on our territory in the airport's vicinity. These attempts were thwarted by the militia," the statement read.

Later developments indicated two civilian deaths in 66 attacks in the region, mostly in the Donetsk airport and the town of Horlivka, according to the DPR Defense Ministry cited by the agency.

© Sputnik / Igor Maslov
Shelling Continues in Donetsk, Ukraine
The Donetsk airport has recently reemerged as a crisis area since the onset of armed conflict in eastern Ukraine. It fell under Kiev-led forces' control in May 2014, who have since repelled repeated attempts by DPR militia to force them out.

The latest attacks took place in violation of a contentious ceasefire agreement that was reached under Russian and OSCE mediation on September 5. Kiev launched military operations to suppress independence supporters in southeast Ukraine in April 2014. According to Friday's estimates by a World Health Organization (WHO) spokesperson, the death toll from the armed conflict exceeded 4,800 people.