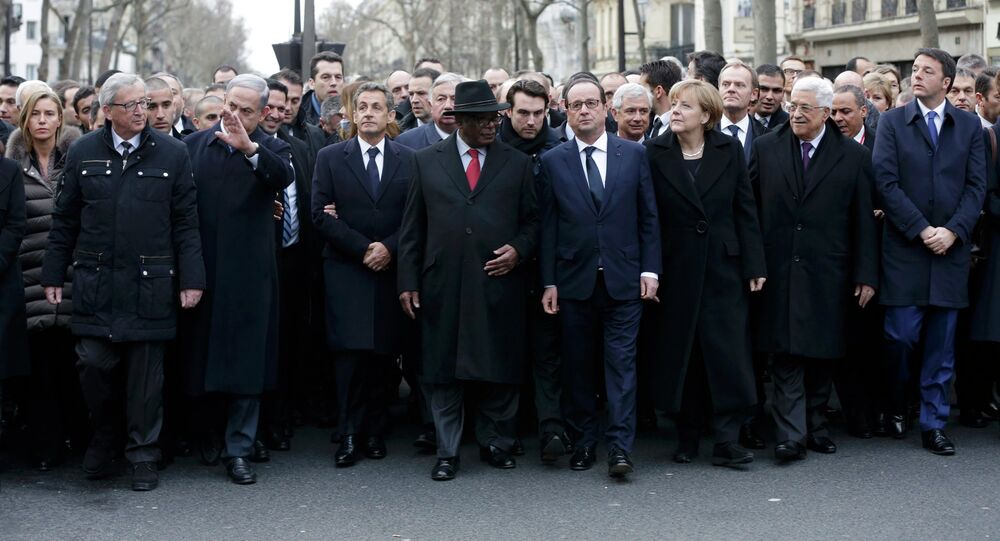 The politicians were met with applause and cheers from residents of the buildings along the march route. The top leaders were followed by the heads of France’s various religious groups, as well as some local politicians.

PARIS, January 11 (Sputnik) — A group of world leaders have completed their participation in the Paris unity rally, honoring the victims of the recent terrorist attacks in the French capital.

The politicians were met with applause and cheers from residents of the buildings along the march route. The top leaders were followed by the heads of France’s various religious groups, as well as some local politicians.

After a minute of silence in memory of the terrorist attacks' victims, Hollande thanked each of the leaders attending the march and met with the victims’ families. According to local media, the French president has now returned to the Elysee Palace.

More than 1,3 million people are reportedly taking part in the ongoing rally, which kicked off at Paris’ Place de la Republique square at around 2 p.m. GMT.

Looking at the streets of #ParisUnityMarch there is hope that the answer to hate is more Peace. #CharlieHebdo pic.twitter.com/Rzxc1coL4T

Numerous solidarity rallies are underway across the world, including in London, Brussels, Jerusalem and Beirut. A number of US cities are expected to hold rallies in support of free speech and in commemoration of the French victims later in the day.

The string of terror attacks in the Paris region started on Wednesday, when brothers Said and Cherif Kouachi killed 12 at the office of Charlie Hebdo, a magazine known for ridiculing Islam and other religions in its cartoons. The gunmen were killed by the police after two days of nationwide manhunt.

On Friday, Amedy Coulibaly killed four hostages at a Paris kosher food shop before being shot dead in a police raid. Coulibaly is also suspected of killing a police officer on Thursday. On Sunday, a video appeared on social media, showing Coulibaly pledging allegiance to the Islamic State.