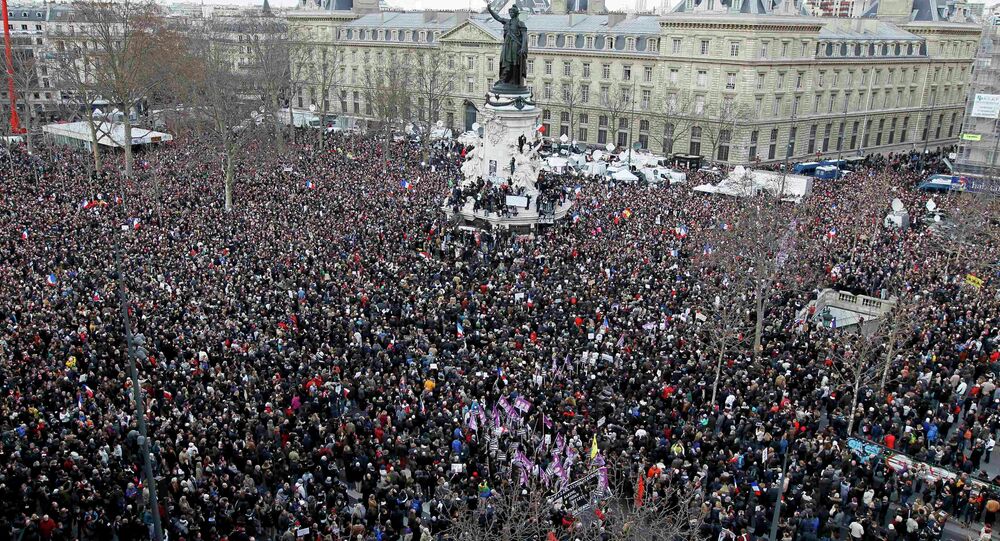 World leaders and high-ranking officials from around the globe joined hundreds of thousands of French citizens at the solidarity march in Paris on Sunday in honor of Charlie Hebdo attack victims.

More than a million of demonstrators attended the Paris march in honor of the victims of a deadly terror attack on a French satirical magazine Charlie Hebdo that had begun at 3 p.m. local time (14:00 GMT) Sunday in Paris.

The solidarity march brought together dozens of world leaders and political high-fliers from around the globe. A delegation of Russian officials, headed by Foreign Minister Sergei Lavrov, attended the rally, as well as leaders from across Europe – Germany, Britain, Spain, Sweden, Norway, Latvia, Ukraine and the Turkish, Georgian and Israeli prime ministers, and the Palestinian president.

The demonstration comes after days of spontaneous rallies across France and also the world in support of freedom of expressions. Marches were held in Paris, Nice, Nantes, Bordeaux, Lyon, Marseilles and Toulouse, drawing around 700,000 people, with thousands gathering elsewhere across the globe holding up pens – the symbol of journalism – and banners that read "Je Suis Charlie" (I am Chalie), a reference to Chalrie Hebdo magazine.

"Je Suis Charlie" has been a rallying cry for protesters after eight Charlie Hebdo cartoonists were murdered Wednesday by Islamist terrorists Cherif and Said Kouachi, who also killed police officers outside the magazine's office. Another attacker, Amedy Coulibaly, who is believed to have had links to the brothers, killed four hostages in a supermarket in eastern Paris on Friday. He is also reported to be behind the murder of a policewoman that took place in southern Paris on Thursday.