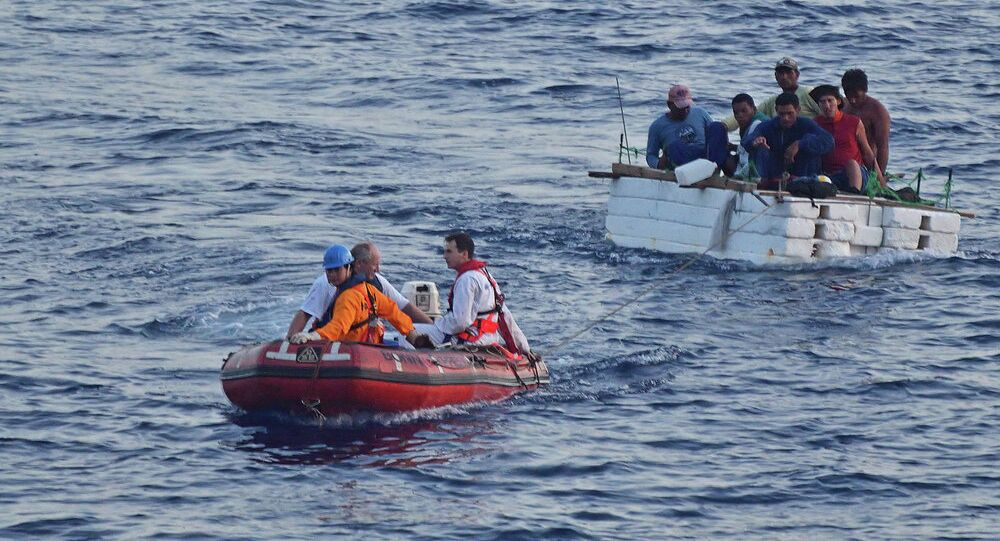 Italian rescuers give a helping hand to migrants aboard an uncontrolled ship after the vessel has lost power and has been abandoned by the captain and crew.

© Flickr / Contando Estrelas
Some 70 African Migrants Scale Fence Between Spain and Morocco: Police
MOSCOW, January 2 (Sputnik) – Italian rescuers boarded a merchant ship, with as many as 450 migrants, lost in rough waters off the coast southeast of Italy, the BBC reports.

The Ezadeen, the ship sailing under the flag of Sierra Leone, had lost power and was abandoned by its captain and crew. The ship was some 60 kilometers off Italy’s southeastern tip. According to the Guardian, Italian Coastguard commander Filippo Marini said one of the migrants managed to operate the ship’s radio and called for help early on Friday: “We’re without crew, we’re heading toward the Italian coast and we have no one to steer.”

© Sputnik / Boris Babanov
Corfu: Ship With 600 Migrants on Board Sends SOS Signal, Armed Men Suspected On Board
The Italian Coastguard asked the Icelandic patrol boat Tyr for assistance, which happened to be near the area and was conducting a patrol mission for Frontex, the European Union’s border agency. The Tyr managed to come near the Ezadeen, but bad weather made boarding impossible.

The Italian air force sent a helicopter from an air base in southern Italy to help rescuers and doctors from the Icelandic rescue ship to board the runaway Ezadeen. “Because of the difficult weather conditions the ship can only be boarded from the air,” the air force said in a statement, quoted by Deutsche Welle.

Latest on bid to rescue abandoned migrant ship with at least 400 on board off Italy #Ezadeen http://t.co/XCl47JJajT pic.twitter.com/GrM2R2YCdx

The Ezadeen was built half a century ago and has been used as a livestock carrier. The ship was registered to a Lebanese company, but later came under the control of human traffickers, the BBC said.

© AP Photo / Kirsty Wigglesworth
Number of Migrants Attempting to Illegally Enter UK Quadruples Over Past Three Years
The current incident comes only two days after another ship, carrying more than 700 migrants was intercepted by Italian sailors. The migrants, mostly from Syria, were also abandoned by their crew while navigating through the Mediterranean waters from Turkey to Italy, the Guardian said.

The number of migrants trying to illegally reach Europe by sea from the Middle East and North Africa reached a record high in 2014. More than 170,000 people were rescued by Italy in the last 14 months, while as many as 3,000 perished trying to make the journey across the sea, Aljazeera said.

Migrants would pay between $4-6,000 each for a place on the #Ezadeen, says IOM worker — http://t.co/s8OjPVfYpM pic.twitter.com/gMN2DFp0D2