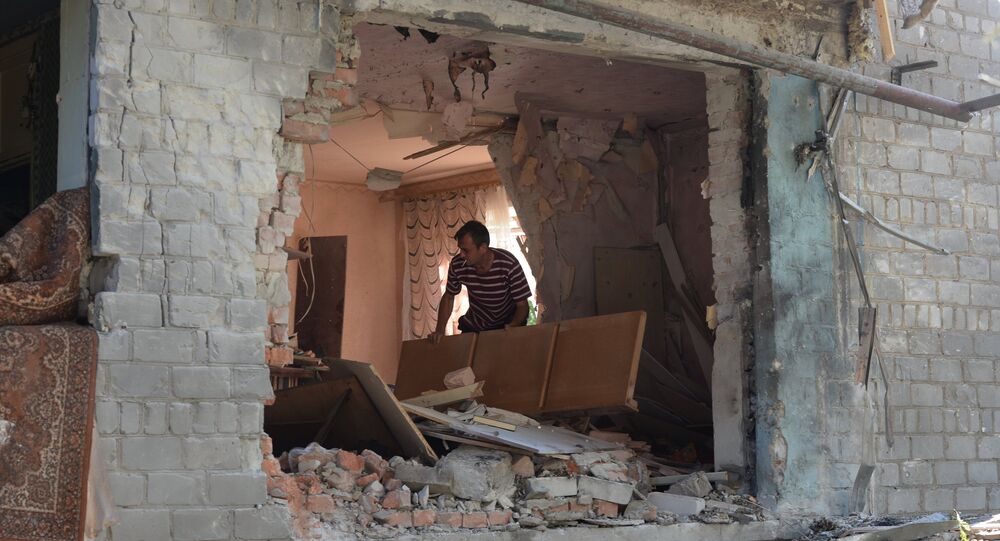 The ceasefire is shaky, as Kiev may be using it as disguise for its preparation to continue military operation in the eastern Ukraine, the leader of the self-proclaimed Donetsk People's Republic warns. Alexander Zakharchenko stresses that several military transport planes have landed in eastern Ukraine's airports.

© Sputnik / Viktor Toltschko
Minsk Peace Talks on Ukraine ‘Difficult’: LPR Negotiator
DONETSK, December 25 (Sputnik) – The Kiev government views the ceasefire only as a chance to prepare for the resumption of military action against independence supports and is ready to violate the truce, the leader of the self-proclaimed Donetsk People’s Republic (DPR) said Thursday at a press conference.

Donetsk media have repeatedly raised the alarm about the Kiev government’s suspicious activities in eastern Ukraine, including the closure of three airports in mid-December for reasons that have never been officially explained.

“The closure of airports in [eastern] Ukraine shows that preparations are under way to disrupt the negotiations and resume hostilities,” Alexander Zakharchenko said.

Ukrainian military spokesperson Vladislav Seleznev said that the airports of Zaporizhia, Kharkiv and Dnipropetrovsk were closed for an “anti-terrorist operation,” but gave no other details.

© REUTERS / Maxim Zmeyev
Putin: Donbas Economic Blockade Futile, Counterproductive Path for Ukraine
“Judging by the [military] movement that is currently under way in Ukraine, they (Kiev) are preparing to intervene into our territory. The situation smacks of mid-July 1941. We completely understand that a lie is being told in regard to pulling back [heavy military] equipment…we’re waiting,” he said.

On Monday Ukrainian President Petro Poroshenko said that the leaders of France, Germany, Ukraine, and Russia had reached an agreement to reconvene the Contact Group in Minsk on December 24 and 26. The first round of talks took place Wednesday. Later that day Vladislav Deinego, the chief negotiator of the self-proclaimed Luhansk People's Republic (LPR) said in a statement that the talks were "difficult." The date for the next meeting is still under discussion.

In September, Kiev and the independence supporters of eastern Ukraine agreed to a ceasefire, but the warring sides have since repeatedly accused each other of violating the truce.