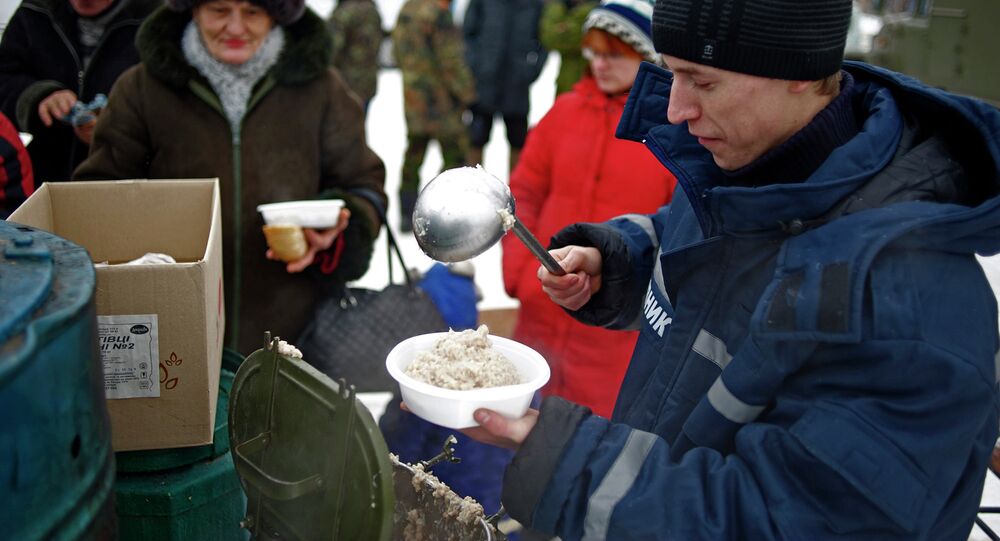 The UN Office for the Coordination of Humanitarian Affairs has announced that the "Day of Silence", started at 10:00 am on 9 December and continued throughout the week in Ukraine, has spared civilians from violence.

© Sputnik / Nikolay Lazarenko
Kiev Ready to Observe ‘Day of Silence’ on Tuesday: Defense Minister
UNITED NATIONS, December 13 (Sputnik) – The "Day of Silence", observed in Ukraine has spared civilians from violence, but residents of the country's southeast, which has been severely affected by Kiev's military operation, launched in the region earlier this year, remain vulnerable, the UN Office for the Coordination of Humanitarian Affairs (OCHA) has stressed.

"A "Day of Silence", agreed by all parties to the [Ukrainian] conflict, began at 10:00 am on 9 December and continued throughout the week. No civilian casualties were reported throughout this period – a noteworthy "success"," the OCHA Ukraine Situation Report, released Friday, said.

© REUTERS / Shamil Zhumatov
Donetsk Reports Strikes on Airport by Ukrainian Forces on 'Day of Silence'
The OCHA stressed, however, that since the National Bank of Ukraine has closed locations in the country's southeastern regions, the local population will have difficulties living through the winter.

"The National Bank of Ukraine has also closed locations and services, complicating access to cash and liquidity for conflict-affected people, living in these areas. The human rights and humanitarian implications of this move are serious and will deepen the vulnerability of those populations most in need of assistance, particularly, as winter deepens making these essential services more life-saving in nature," the OCHA said in its Friday report.

Earlier, speaking before the UN General Assembly Russia's Deputy Permanent Representative to the United Nations Dmitry Maksimychev has stressed that because Kiev has blocked the financial activity of Donetsk and Luhansk authorities, the most vulnerable segments of the population of southeastern Ukraine, such as retirees, veterans, disabled people and children have been left with practically no means to survive, which is a violation of international humanitarian laws.

© Sputnik / Alexandr Maksimenko
Kiev Uncertain on Extension of 'Day of Silence' in East Ukraine: Official
Maksimychev said Russia will be stepping up its humanitarian assistance to the residents of the Donetsk and Luhansk regions that have already received more than 10,700 tons of humanitarian aid from Russia.

Independence supporters in Ukraine's southeast have been subject to a military operation launched by Kiev in mid-April. On September 5, a ceasefire deal was reached between the two sides, but even after the agreement came into force they continued to accuse each other of violating the truce.

Last week, Ukrainian President Petro Poroshenko announced the introduction of a "silence regime" in the southeast of the country beginning December 9, in a bid to renew ceasefire efforts.

In a separate move, the Ukrainian government declared Tuesday a "day of silence" to allow the withdrawal of heavy arms and artillery from the region.