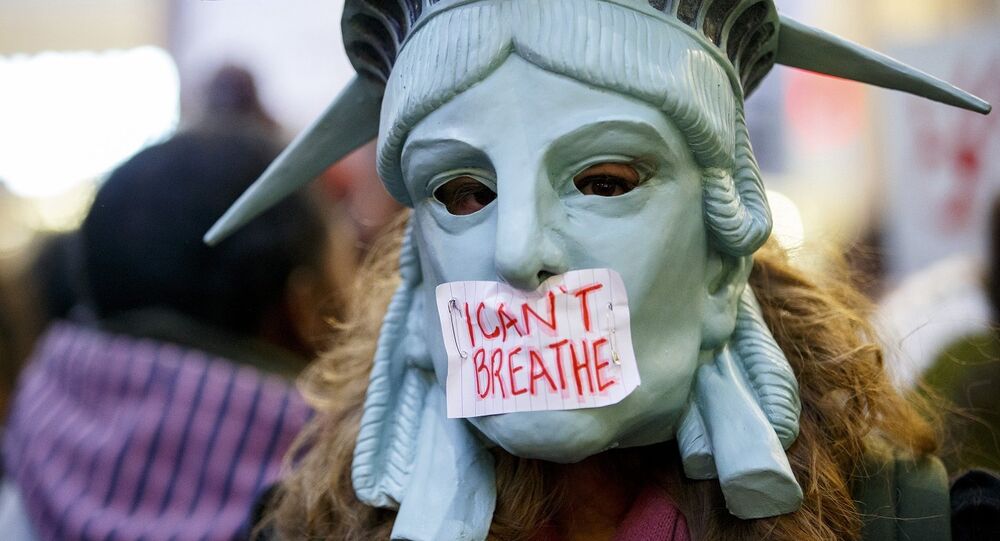 Police arrested 76 people last night as London protesters threw their weight behind a wave of rallies in the US over decisions by authorities not to press charges in cases where white police officers killed black men.

The decisions have special resonance in the UK, where the fatal shooting of 29-year-old black resident Mark Duggan by police triggered riots in 2011.

Hundreds of protesters brought parts of the huge Westfield Shopping Centre in West London to a standstill as they staged a ‘die-in’ in a show of solidarity with the recent wave of protests in the US against the killing of African-American Eric Garner by white New York Police Officer Daniel Pantaleo.

Garner, a 43-year-old father of six, died in New York on 17 July from asphyxiation after police officers tried to restrain him during an attempted arrest for allegedly selling untaxed cigarettes on Staten Island. Protesters chanted "We can't breathe", in reference to the last words he gasped as he was held in a police chokehold.

Banners carried by protesters at the mall read “Black Lives Matter” and "Solidarity with Ferguson", in reference to the Missouri suburb which saw riots over the shooting of unarmed 18-year-old Michael Brown by a white officer.

Those arrested at Westfield were taken away in red double decker buses. Protesters said the arrests were intended to intimidate people into not staging demonstrations.

"We will always work with those that wish to demonstrate lawfully, as the majority of protestors did," said police chief superintendent Mark Bird.

"However, we will not tolerate the small minority that offer violence or commit other criminal acts, such as that witnessed outside Westfield.”

The organisers of the Westfield protest had said on their Facebook page: “We would like to state that this is a non-violent demonstration and we will be joined by international media broadcasting our Die-In back to the screens of black Americans in the USA. We need to make our voices loud and heard."

In the US, human rights activists have called for a protest march in Washington D.C. on 13 December and planned for a human rights summit later.