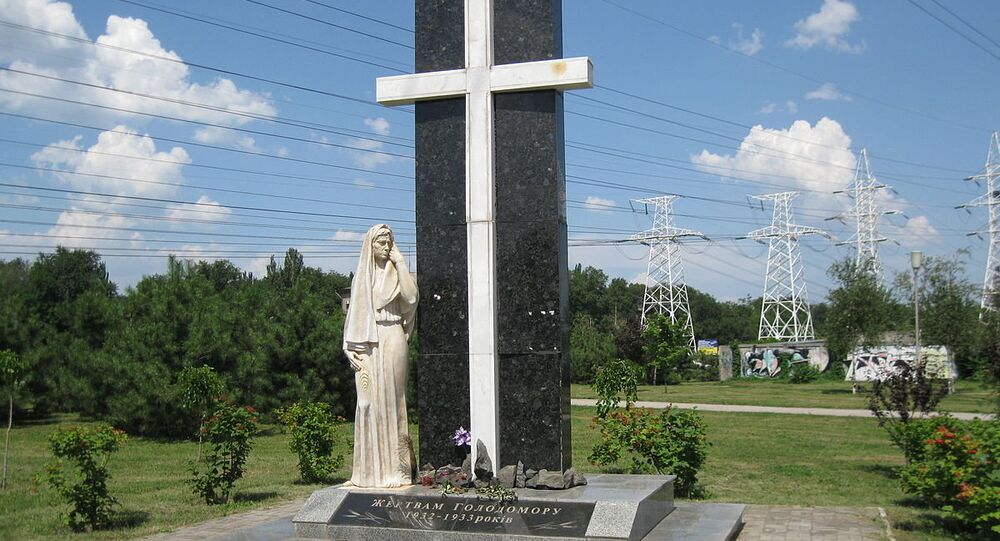 Remembrance Day of the Holodomor Victims

Holodomor Remembrance Day for the victims of a famine is marked every year on the fourth Saturday in Ukraine.

MOSCOW, November 22 (Sputnik) — Every year, on the fourth Saturday of November, Ukraine marks the Holodomor Remembrance Day for the victims of a famine in the Ukrainian Soviet Social Republic (Ukrainian SSR).

First official decree to establish the Holodomor Remembrance Day was signed in 1932-1933 by Ukrainian president of that time Leonid Kravchuk, ahead of the 60th anniversary of the Holodomor, which means “inflicting death by starvation.”

On November 26, 1998, second president of Ukraine Leonid Kuchma signed a decree on establishing the Remembrance Day of the Holodomor victims, which is observed annually since then.

Following other edits in 2007, the name was changed back to the Remembrance Day of the Holodomor Victims.

The Holodomor was a mass famine, which caused thousands of deaths. It happened due to starvation in the USSR in 1932-1933. The “Holodomor” concept was developed by Ukrainian immigrants. In 1940-1970 several works were published in the West, which called the 1932-1933 starvation a planned action of Kremlin aimed at physical and moral destruction of Ukrainian citizens.

Historians and politicians failed to reach a common opinion on the causes of the Holodomor. Many experts said that these events were an unforeseen consequence of radical economic reforms in the USSR in the end of the 1920s and in the beginning of the 1930s. The Holodomor was a result of collectivization politics, one of the main parts of the so-called “great market”, accelerated agricultural and social modernization of the USSR. Bolsheviks thought that it was supposed to provide necessary funds for industrialization and for creation of required conditions for agriculture reform.

The great famine in the beginning of 1930s in USSR was a closed topic. In the Soviet media it appeared for the first time only by the end of the Perestroika. Now the starvation of 1932-1932 is considered to be one of the major humanitarian catastrophes of the Soviet time.

In 2008, the State Duma of the Russian Federation published a report on “Remembrance of the 1930s famine victims in the USSR”. The report concluded that in the territories of Povolzhie, Central-Chernozemnaya region, North Caucasus, Ural, Crimea, Western Siberia, Kazakhstan, Ukraine, Belarus, around 7 million people died from hunger and illnesses caused by famine in 1932-1933. The reason for those deaths was repressive measures aimed at ensuring the grain-collection, which severely worsened consequences of bad harvest in 1932.

Ukraine calls on the international community, the UN and Russia to officially recognize Holodomor as genocide. In November 2006, Ukrainian President Viktor Yushchenko signed a law, passed by Verkhovna Rada “On the Holodomor of 1932-1933 in Ukraine”, where the Holodomor is recognized as a genocide of Ukrainian people. Public denial of the Holodomor, according to the law, is considered as “the violation of memory of millions of the Holodomor victims, the disparagement of Ukrainian nation’s dignity and is illegal”.

In November 2008, Kremlin press service published Russian President Dmitry Medvedev’s address to Ukrainian President Viktor Yushchenko, where Medvedev criticized Ukrainian view on the Holodomor and said that it aims to disconnect the nations. Russian President called on Ukraine to start working on formulating the common approach. The statement said also that the tragic events of the 1930s were used by Ukraine to reach current political goals.

During the 58th session of the UN General Assembly, the joint statement was adopted, which called the famine “Ukrainian nation’s tragedy”, however not a single word about “genocide” was stated. The document also embodied a call to remember the starvation victims not only in Ukraine, but also in Russia and Kazakhstan.

In 2008, the Memorial in Commemoration of Famines’ Victims in Ukraine was erected on the slopes of the Dnepr River. The memorial opening ceremony was dedicated to the 75th anniversary of the Holodomor.

On July 8, 2009, Ukrainian Cabinet of Ministers ordered to establish a museum in commemoration of the Holodomor victims in Ukraine”.

Traditionally, on the Remembrance Day of the Holodomor Victims, Ukrainian authorities attend a special worship service and lay symbolic pots with grain to the memorials in commemoration of the Holodomor victims.

Until 2008, the ceremony took place in front of the memorial in Mikhaylovskaya square, however, following the opening of the Memorial in Commemoration of Famines’ Victims in Ukraine, the ceremony takes place there.

During the Remembrance Day of the Holodomor Victims people in Ukraine refrain from attending the entertainment events, national TV channels adjust their programs accordingly. When darkness falls, people light up candles in houses and apartments all over Ukraine – as a way to commemorate the famines’ victims.

PACE finds Stalin regime guilty of Holodomor, does not recognize it as genocide