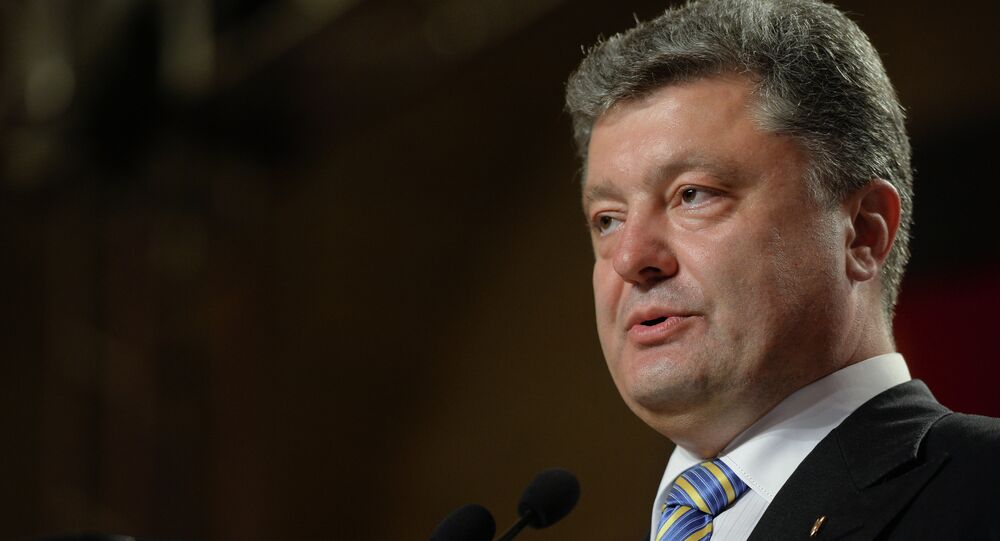 Slovakian demonstrators met the Ukrainian President with booes and chants in Bratislava, expressing dissatisfaction with his visit to their country.

MOSCOW, November 17 (Sputnik) – The visit of President of Ukraine Petro Poroshenko to Bratislava was tainted by protesters who booed the president; most of them chanting Fascist, according to the video of the protest which first appeared on YouTube.

The demonstration was attended by about 30 people who brought the flag of Novorossiya and banners. Law enforcement authorities did not attempt to stop the protesters.

"We came here to oppose the murder of our fraternal people," said one protester, who called himself Arthur. Political leadership in Kiev according to him, in the east of the country involves murder of its own citizens. Protesters held banners in hands saying: "Czech and Slovakia are with you Novorusko" or "Save Donbas against the Ukrainian army,” reports Slovakian site Topky.

According to the UN statistics, more than four thousand civilians have been killed and more than nine thousands injured since the conflict began in April.

The protesters in Slovakia were expressing their anger at the Ukrainian president, who was on official visit in Bratislava for two days. According to the site Peticie, the Slovakian people showed their contempt by demanding a signed petition to declare Poroshenko “persona non grata” and restrict him from visiting Slovakia. They said the same thing of President Obama, who they see as an accomplice of Poroshenko in the Ukrainian conflict.

The statement of petition read, “Reception of any politician who has the blood of innocent’s people on their hands, — especially their own fellow citizens, — can be understood only as a formal agreement with their policy of bloodshed. The signatories to the petition do not agree with such a policy, nor does the President or other top representative of the Slovak Republic, agreement to promote politicians and governments that bombard their own population, — for this there is no excuse,” stated in Peticie.

Contrary to the feelings of Slovakian people, the President of Slovakia Andrej Kiska openly supports Poroshenko and hence his "genocidal" policy, as reported by the petition site Peticie.

In his statement during the news conference, Kiska said that the fate of Ukraine is also important for Slovakia. He stated that according to him, the territorial integrity of Ukraine must be respected in Bratislava at a joint news conference with Peter Poroshenko. According to Kiska "If the dialogue fails, bring on sanctions," to which he added that sanctions have not yet shown to be effective. Kiska declared his willingness to help Ukraine despite the fact that the people of Slovakia were protesting outside calling Poroshenko a “fascist.”