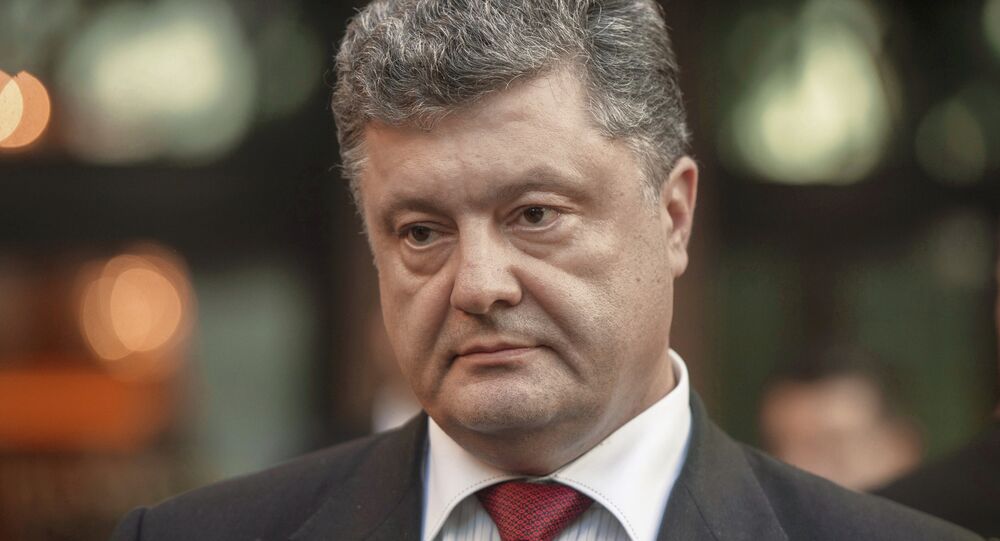 According to a decree, President Poroshenko ordered the Ukrainian national bank to stop serving card accounts in Donetsk and Luhansk regions within one month.

MOSCOW, November 15 (Sputnik) — Ukraine's President Petro Poroshenko has ordered a halt in serving bank accounts of enterprises and residents in southeastern Ukraine within a month, said a decree published on the president's official website Saturday.

"National bank of Ukraine [shall] adopt measures within one month to stop serving bank accounts, including card accounts, that belong to economic entities… and residents in the territories of anti-terror operation in Donetsk and Luhansk regions," the decree said.

Poroshenko has commissioned the Ministry of Justice to move prisoners from the region of the special operation in Donbas and suggested amnesty for those convicted of crimes of minor or medium gravity, a decree published on the president's official website Saturday said.

"Ministry of Justice [shall] immediately take measures for ensuring the transfer of the bodies and institutions of the State Penitentiary Service of Ukraine, the convicts and detained persons from the territories of the anti-terror operation in Donetsk and Luhansk regions to other regions of Ukraine," the decree said.

Poroshenko also "suggested amnesty for persons serving sentences in these institutions and convicted of crimes of minor or medium gravity".

Moreover, Ukraine's president has ordered to evacuate all state institutions and courts from the territories of anti-terror operation.

Poroshenko asked the government Saturday to keep the Council of Europe informed on Kiev being forced to take steps violating the European Convention for the Protection of Human Rights in Donbas.

"To the Ministry of Foreign Affairs of Ukraine… together with the Ministry of Justice of Ukraine… to ensure that within a week in accordance with the article 15 of the [European] Convention for the Protection of Human Rights and Fundamental Freedoms… a statement on behalf of Ukraine about Kiev taking measures derogating from its obligations under the Convention for the Protection of Human Rights on the several territories of the area of special operation in Donetsk and Luhansk Regions, is sent to the Secretary General of the Council of Europe," the decree said.

According to the document, Poroshenko asked the government to keep the Secretary General of the Council of Europe informed on the measures taken by Kiev and on the reasons behind these steps.

"To inform the Secretary General of the Council of Europe on the security of the situation in Donetsk and Luhansk regions at least once a month," the decree said.