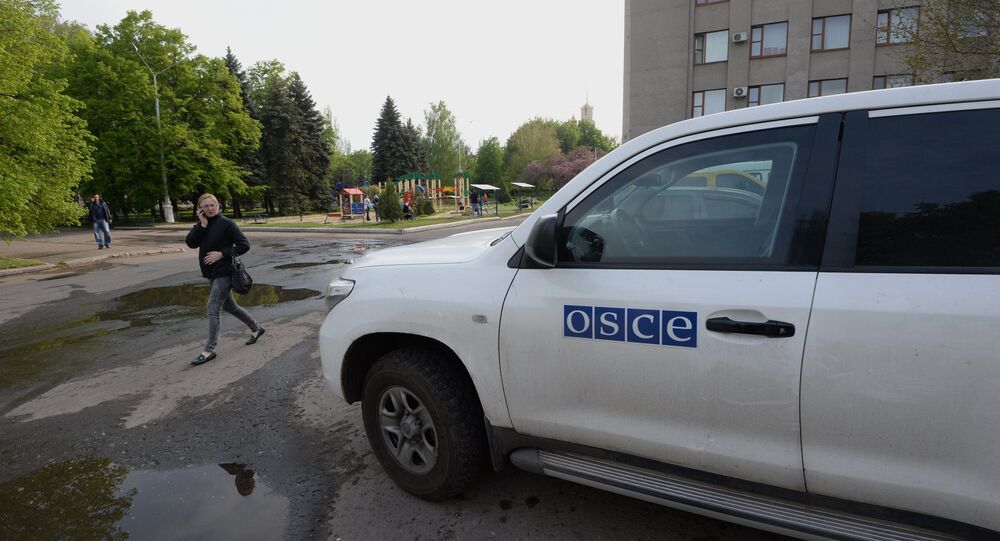 The OSCE Special Monitoring Mission reported that the Ukrainian and Russian heads of the Joint Centre for Control and Co-ordination have agreed on a draft schedule of Disengagement in Donbas.

MOSCOW, November 15 (Sputnik) – The Ukrainian and Russian heads of the Joint Centre for Control and Co-ordination (JCCC) have agreed on a draft schedule for gradual disengagement of forces along the line of contact in southeastern Ukraine (Donbas), the OSCE Special Monitoring Mission (SMM) has said in a report.

"The SMM met the Ukrainian and Russian heads of the JCCC, who said that the two of them had agreed a draft schedule for gradual disengagement. The draft document, which they signed at the end of the meeting, proposed three phases: a ceasefire (two days); withdrawal of heavy weapons (five days); and disengagement of forces to the line of contact referred to in the Minsk Memorandum (21 days)," the report said.

"Earlier that day they had started to discuss the plan with members of the "Donetsk People's Republic (DPR)"," the report, released by the Organization for Security and Co-Operation (OSCE) Friday, added.

An armed conflict in Ukraine escalated in mid-April, when Kiev launched a military operation against independence supporters in the country's southeastern regions.

On September 5, the conflicting sides agreed on a ceasefire during a meeting of the trilateral Contact Group on Ukraine in Minsk. A memorandum specifying the implementation of the ceasefire between Kiev forces and the self-proclaimed people's republics of Donetsk and Luhansk was adopted at another Contact Group meeting on September 19.

The Minsk agreements stipulated a withdrawal of troops along the line of contact between the conflicting sides in southeastern Ukraine.

The SMM, which was deployed at the Ukrainian government's request after the escalation of the crisis, is currently monitoring the implementation of the ceasefire agreements in the country.