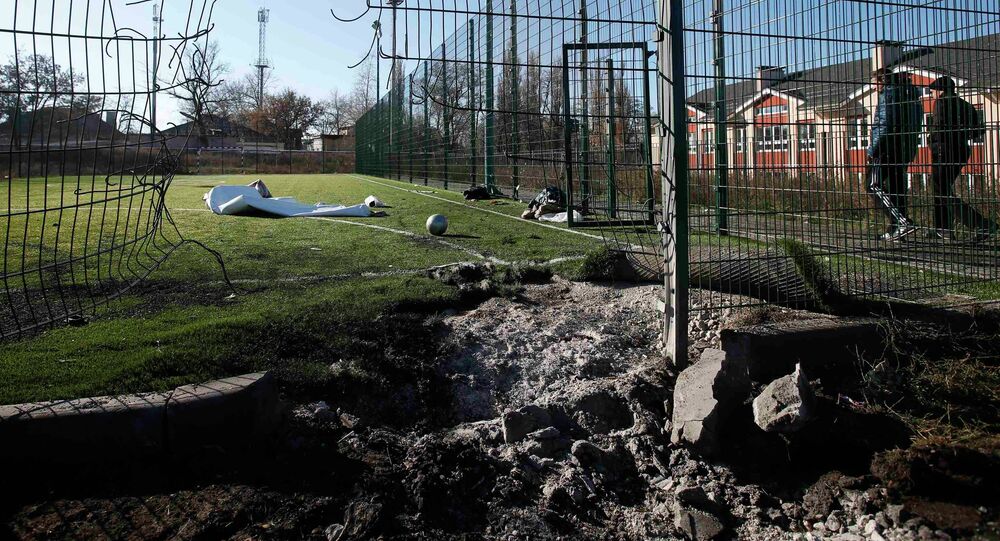 Human Rights Watch is ready to represent evidence of rocket attacks on Donetsk to different internations organisations, including the United Nations.

GENEVA, November 12 (RIA Novosti) – Human Rights Watch is ready to hand over its evidence of rocket attacks on the eastern Ukrainian city of Donetsk to the United Nations and other international organizations, a senior HRW expert said Wednesday.

"It's hard for us to force, we can't come up knocking on the door so we get heard. So of course we're willing to explain our findings to any interested government or international organization," Mark Hiznay, a senior researcher in the HRW Arms Division, told reporters.

Earlier in the day, the international rights organization said it had uncovered evidence that cluster munition rockets containing submunitions were fired at Donetsk from government-held positions during an official ceasefire in early October.

"I had found 16 cargo sections from Uragan and Smetch rockets. These are just the empty skeletons without the submunition in them. And we have found a similar number of rocket engines and nose cones. So the number of weapons used is more substantial than just the physical remains that we found," Hiznay claimed.

The expert elaborated that HRW is now working with the governments of various countries and international organizations providing them with any information it has concerning the issue on a bilateral basis.

Cluster munitions contain dozens or hundreds of submunitions. After the launch of a cluster bomb a container opens up and disperses submunitions, making them spread over a wide area endangering anyone in the vicinity. So far, 114 countries have joined a treaty, banning cluster munitions. Ukraine is not party to the treaty.

The military operation, launched by Kiev authorities in mid-April to suppress independence supporters in Donetsk and Luhansk regions, has been repeatedly condemned by Moscow.

On September 5, Ukrainian government forces and the self-proclaimed Donetsk and Luhansk People's Republics reached a ceasefire deal in Minsk through the mediation of Russia and the Organization for Security and Co-operation in Europe (OSCE). However, both sides have subsequently accused each other of violating the truce on a regular basis.