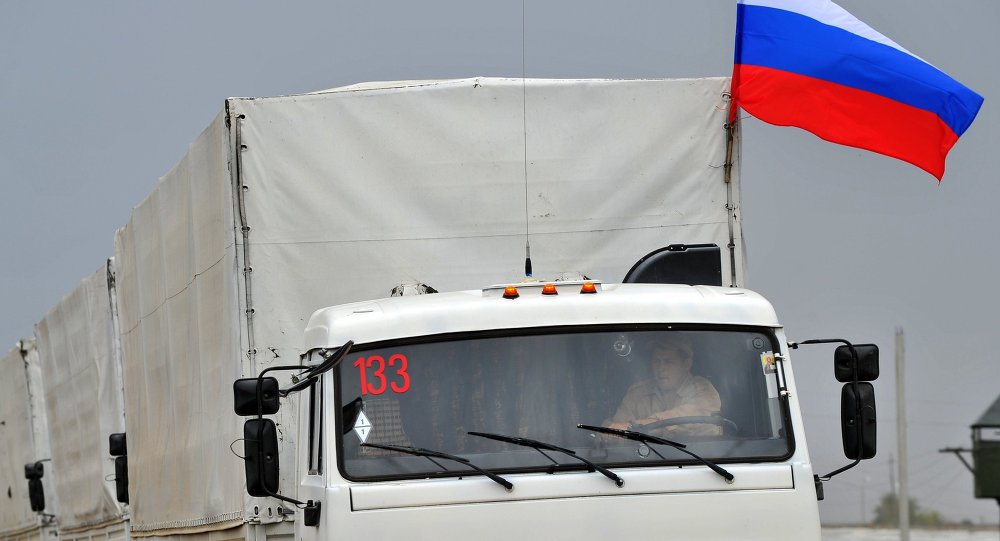 A deputy chief of the national crisis management center at the ministry said that the convoy with humanitarian aid for the stricken east Ukraine regions has been formed and is to set off for Donetsk and Luhansk soon.

ROSTOV-ON-DON, November 4 (RIA Novosti) — The Russian Ministry of Emergency Situations has finished loading its sixth convoy of some 20 vehicles that will bring a new batch of humanitarian aid to the stricken east Ukraine regions, a deputy chief of the national crisis management center at the ministry said early Tuesday.

"We are done forming another convoy with humanitarian assistance. It will set out for Donetsk and Luhansk soon," the Emergency Ministry's Oleg Voronov said.

The convoy will carry a 100-tonnes load of humanitarian cargo, which includes medicine and fuel.

Russia has been sending aid convoys to Ukraine's southeast since August. Hundreds of white-painted trucks have delivered tons of such essentials as food, water, power generators, medicine and warm clothes to Donetsk and Luhansk to replenish their stocks ahead of the coming winter.

Russia's previous humanitarian convoy returned on Sunday to the Rostov Region which borders on Ukraine. After being checked by Ukrainian officials at the eastern border with Russia the trucks split into two even groups and proceeded along two roads to deliver the aid to both regions.

In April, Ukrainian authorities launched a military operation in the country's southeast, where people refused to accept the new government that came to power following a coup in February, and called for independence instead.

The military actions brought about a severe humanitarian crisis in Donbas regions, where the locals were left without food, drinking water and electricity.

Russia's action on the humanitarian crisis in eastern Ukraine has drawn condemnations from Kiev's Western allies who claimed Moscow used its aid missions as a smoke screen for illegal military maneuvers.

Kiev Unaware of Contents of Russian Humanitarian Convoy for Donbas