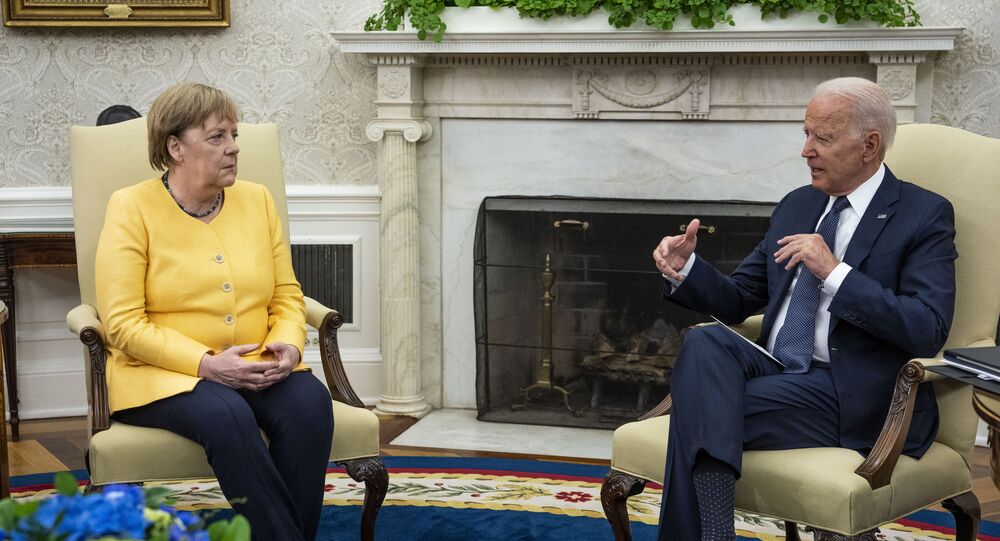 There is so much misdirection over the big news this week that the US finally reached a “deal” with Germany to allow the Nord Stream 2 gas project to go ahead.

This is the mega pipeline under the Baltic Sea supplying Germany and the rest of Europe with natural gas from Russia. The project had been stalled by American sanctions, but now the Biden administration has announced that it will no longer stand in the way of its completion.

President Joe Biden knew well that there was no way of stopping Nord Stream 2 whose 1,230-kilometer construction route from Russia to Germany is over 95 percent complete. Berlin has repeatedly told Washington that it would not cancel the project which will double the flow of clean, economical Russian gas to fuel Germany’s industries and households.

So Biden had enough cop-on to know that the United States would only look pathetically weak when its imperious demands on Berlin were eventually snubbed.

© Sputnik / Dmitry Lelchuk
Ukrainian Parliament Speaker Appeals to US Congress to Continue Nord Stream 2 Sanction Policy
Hence the spin this week that Washington had come up with a “deal” with Germany to let Nord Stream 2 proceed. In that supposed compromise, Berlin is obliged to provide financial aid to Ukraine and assure Kiev that Russia will not be allowed to use energy trade as a weapon against Ukraine by reducing an existing overland transit route for gas. This is more misdirection.

Russia has condemned the politicization of the Nord Stream 2 project as anything other than a commercial transaction that benefits Europe. Moscow rejects the slur that it is weaponizing energy trade to allegedly threaten Ukraine. Such hysteria is just Washington’s propaganda to justify its own egregious interference and bullying in European-Russian affairs.

In any case, the real story behind the Nord Stream 2 “deal” this week is not Russia or Ukraine. It is China.

In announcing Washington’s “concession”, the State Department said the rationale was that the United States did not want to “alienate” Germany.

However, the Americans did not specify what the risk of alienation was about exactly. We can fill in the gap. It is about Washington keeping Germany and the rest of Europe in line for its bigger geopolitical objective of confronting and undermining China.

Russia and China are both fingered as “great power rivals” by numerous American politicians and pundits.

But the Biden administration has signaled that it considers China as the “top long-term threat” to US national security. The “threat” has less to do with military power and more to do with China’s global economic power. Beijing’s increasing global economic integration through its Belt and Road Initiative is perceived by the Washington establishment as the death knell for American dominance. US global power relies on unilateral hegemony. China’s advocacy of multipolar relations, mutual partnerships between nations and people-centered development is the nemesis of American imperial power.

Unlike the boorish Trump, the Biden presidency is more in tune with American imperial planners and the need to work with European allies to form a stronger front for pursuing US imperial objectives. Biden and his aides have been at pains to repair the transatlantic alliance that Trump damaged with his abrupt “America First” vulgarism.

In taking down China as a global rival, Washington knows it has to smooth out relations with Germany and the rest of Europe.

That is why the Biden administration appears to be making a concession over the Nord Stream 2 project. It knows that the gas trade with Russia is inviolable for Germany’s vital interests. So it offers a “concession”. But the real move is to recruit Germany and Europe into taking a tougher stance towards China.

It is no coincidence that this week also saw the US establishment ramping up hostility towards China by labeling the government in Beijing as complicit in global cyber hacking and espionage. The State Department called on “our partners and allies to promote responsible state behavior in cyberspace, counter cybercrime, and oppose digital authoritarianism.” In other words, to join US efforts to demonize China.

Nevertheless, here’s the rub. China has become Germany’s largest trade partner, surpassing the United States. China is far more important than the US for sustaining Germany’s export-led economy. Arguably, maintaining relations with Beijing is as vital to Berlin as the gas from Russia is for Germany’s long-term development.

Washington may think it is able to corral and hoodwink Berlin into an anti-China front. But the arrogant Americans will get hit with reality. Their days of bullying others are over.