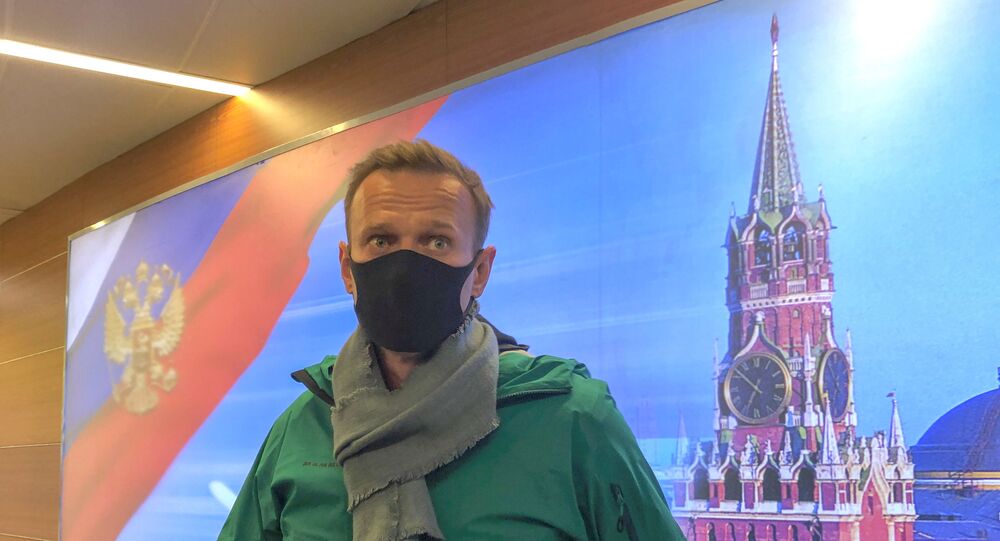 Russian opposition figure Alexei Navalny was detained on returning to Russia from Germany for good, legal reason. He had made a mockery of his parole license.

Navalny is a convicted felon, found guilty of fraud and embezzlement by a Russian court in 2014. But his jail sentence had been suspended with the condition that he report regularly to Russia’s prison authorities. A normal condition.

For nearly five months, however, he had sojourned out of the country as a de facto guest of German authorities. That’s a brazen breach of his parole conditions. And the Russian prison service was right in issuing him a warning at the end of last month that violation of his suspended jail term risked the sentence being converted into detention behind bars.

It’s a sovereign matter of Russian laws that on returning to Russia at the weekend Navalny was arrested and is now in custody awaiting court proceedings in coming weeks on whether to revoke his suspended sentence.

© Sputnik / Alexander Vilf
Russia Did Not Receive Results of Navalny's Toxicological Study From Germany, Prosecution Says
The hue and cry from Western politicians and human rights groups over his arrest Sunday at Moscow’s Sheremetyevo airport is predictable.

High level officials from the United States, Britain, Germany and France, among others, have all made strident statements demanding Navalny’s release.

For all these supposedly concerned advocates of human rights there are only two words: Julian Assange.

Assange is languishing in a British torture-dungeon, persecuted by the American and British governments for the “crime” of revealing to the world the truth about illegal wars and war crimes committed by the United States and Britain.

In all of the years of Assange’s barbaric detention, there has never been a fraction of the official Western public outcry that has been expressed for Navalny.

That’s because Navalny, unlike Assange, is a political asset for a Western agenda to undermine Russia.

© AP Photo / Mstyslav Chernov
Alexei Navalny and his wife Yuliastand in line at the passport control after arriving at Sheremetyevo airport, outside Moscow, Russia, Sunday, Jan. 17, 2021. Russia's prison service says opposition leader Alexei Navalny has been detained at a Moscow airport after returning from Germany.

There are good grounds to believe the Russian blogger-cum-media-activist is funded and directed by Western intelligence services. Everything about his gadfly campaigning smacks of orchestration as an agent provocateur.

The way that Navalny has coordinated closely with Western media and intelligence outfits like Bellingcat to peddle the story that he was allegedly poisoned with Soviet nerve agent Novichok is strong evidence of his provocateur function. And the way that Western media routinely “report” the alleged poisoning as if it is fact is demonstration of how such media are totally dominated by propaganda service to geopolitical agenda.

When Navalny was treated in a Russian hospital after apparently becoming suddenly ill on August 20 onboard a flight to Moscow from Siberia, the doctors found no poisons in his system. The medics said the apparent illness was due to metabolic shock from possible misuse of his own medicines for diabetes, depression and perhaps excess alcohol.

Conspicuously, days later after he was airlifted for further hospital treatment in Berlin, then the German authorities announced they had detected poisoning with nerve agent.

No evidence has ever been presented by the German authorities or other NATO laboratories in such a way that is independently verifiable.

Russia has been denied access to any of their alleged data in order to verify, yet Moscow is condemned for not carrying out a criminal investigation into the alleged poisoning.

Not only that but while Navalny was supposedly recuperating in Germany from a super lethal toxin he somehow had the media resources to purportedly set up prank calls to trick a Russian secret service member to confess to an assassination plot, a plot which the artful activist claimed was ordered by the highest Kremlin authorities.
Russia has dismissed that media stunt as a fake.

© REUTERS / JULIA QUENZLER
WikiLeaks is Reaching Out for Help to Secure Trump's Pardon for Assange
Clearly, there was something inordinately irregular going on – and it wasn’t from the Russian side. How was it that a dubious figure with foreign sponsors could get away with making sensational accusations against the Russian government based on no verifiable evidence?

Accusations which were amplified without question by Western media and politicians.

And all the while this dodgy character Navalny is making a mockery of his parole for a suspended jail sentence. Not only that but there is patently supreme arrogance from him and his foreign allies that Russian sovereign laws can be mocked with impunity.

The Western overreaction to his rightful arrest on returning to Russia after five months of orchestrating a hostile foreign media campaign is proof of their arrogance.

And while Julian Assange is languishing in prison that is damning proof of Western deceit, duplicity and hypocrisy.