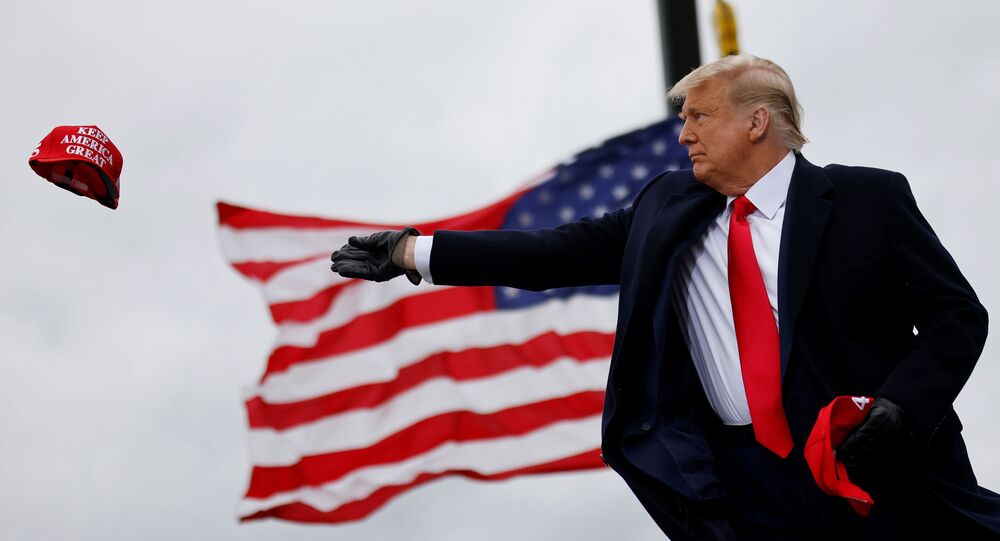 Donald Trump 'Demeans' the Presidency? That's an Insult to Dead Iraqis, Libyans, and Many Others

If you listen to some people talk you’d think that before the continually ‘fact-checked’ Donald Trump came along all the Presidents that came before him were absolute truth-telling paragons and the US never did anything wrong.

The great 'crime' of the Donald this week is not accepting defeat gracefully. You know like that wonderful man John McCain did in 2008. Yes, that wonderful man who backed every neocon war going and who sang 'Bomb, Bomb Bomb, Bomb Bomb Iran' to the tune of the Beach Boys 'Barbara Ann'. What a wheeze that was! The video of McCain conceding to  Obama has 'gone viral', or so we’re told. But that just means it’s been tweeted and amplified by some high-profile 'Inside the Tent' accounts and their chums.

It didn't "go viral" it was boosted and posted everywhere to serve an agenda.

The idea that "going viral" is some kind of accidental organic process is one of great success stories of modern PR. https://t.co/vGc2g6I31J

​'The President should go gracefully' brigade are keen to push the narrative that Trump has destroyed the good name of the US (no sniggering at the back, please ) by challenging the counting in certain states and not accepting the election 'result’. We’re expected to forget that for four years Trump’s opponents claimed that his victory in 2016 was illegitimate because of  'Russian collusion' .That was a baseless claim, repeated ad nauseam by the Democrats, but of course, it wasn’t flagged up as such by media outlets now accusing Trump of making 'baseless claims' about election fraud.

We’re also expected to forget what previous Presidents did. Going back to the 1980s, every POTUS before Trump started a major new war. Obama, the great 'liberal progressive' helped destroy Libya, the country with the highest living standards in the whole of Africa, and also backed extremist 'rebels' in pursuance of 'regime change' in Syria. Bush jnr delivered 'Shock and Awe' to Iraq and launched an invasion of Afghanistan too. Clinton bombed Yugoslavia (illegally) and Iraq. Bush snr went to war with Iraq in the first Gulf War. Think how many people were killed in these wars or had their lives ruined by them. Think how many refugees those conflicts created.

The real problem the Beltway elites have with Trump is that the big brash businessman who loves making deals wasn’t as reliable, or as enthusiastic, a warmonger as those who came before him. It’s revealing that the only time the campaign to de-legitimise his Presidency was temporarily paused, was when he did drop bombs. When he launched a cruise missile attack on a Syrian airbase in April 2019 CNN host Fareed Zakaria declared: "I think Donald Trump became President of the United States last night." Arch neo-con and Trump critic Bill Kristol tweeted: "If Pres Trump takes appropriate action against Assad this #NeverTrumper will of course support him. He’s the President, not merely 'Trump'."

Compare that to the attacks on Trump when he said he was going to withdraw US troops from north-east Syria. His 'liberal' opponents went into meltdown.

There was also very little, if any, praise for Trump when he called off a planned strike on an Iranian airfield in June 2019 after being told it would kill as many as 150 people.

Trump as a President has done some bad things. Of course he has. Arguably the worst, was when he authorised the illegal assassination of the Iranian military commander Qassem Soleimani, whose brigades had been fighting ISIS. The drone attack at Baghdad airport, which got 2020 off to a terrible start and which I described as a "crime against the New Year"  killed nine other people. But, as bad as that was, the hypocrisy of those denouncing Trump is off the scale. When you look at the crimes of previous administrations, which include destroying whole countries-Trump’s transgressions would be well down the list. Yet we are being encouraged to see the Donald as the devil incarnate, the most morally reprehensible President ever. Everything he says is 'fact-checked', as if no other US President told anything but the truth. If only these 'fact-checkers' were around in 2002/3 when President Bush was telling Americans that Iraq had WMDs!

US Presidents are war presidents and taking the US into new wars is part of the unwritten job description. Ironically Trump is being attacked for being a liar - but the real problem with him was that he didn’t make enough baseless claims. Then he would have been hailed as a 'truly great President' by the very same people now attacking him.

While US election fall-out dominates the news schedules, there’s another important contest taking place Stateside this weekend. The Breeders’ Cup, the de facto year-end world championships of Flat racing. This year’s event takes place in Keeneland, Kentucky. In the Breeders’ Cup Mile (due off at 8.15 UK time) last year’s winner Uni should go well again at 11-2, and an each-way chance too can be given for Raging Bull, another course and distance winner who is likely to arrive late (hopefully not too late!) on the scene . In the 1m4f Turf at 9.33 UK time, Dermot Weld’s filly Tarnawa, a successful tip for us on Arc Day at Longchamp last time is in great form, and likely to go well again, with last year‘s 50-1 second United, also considered each-way.  In the 1m2f Classic (at 10.18) Global Campaign, a game winner at Saratoga last time out, could be overpriced at odds of 16-1.