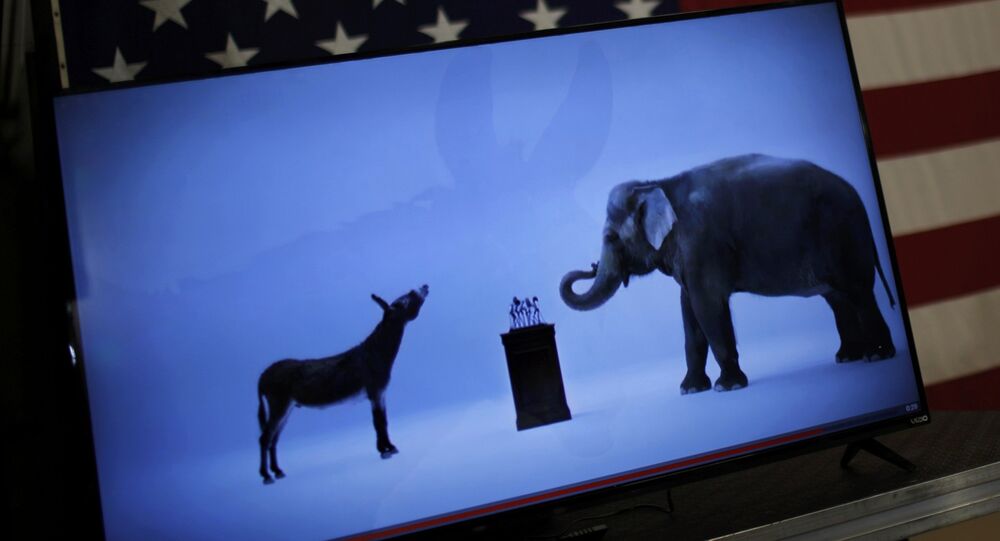 President Trump’s U-turn admission on the coronavirus pandemic, acknowledging that it’s going to get worse before it gets better, could be applied to the general condition of American politics. It can only get worse under present circumstances.

That’s because there is no way to solve deep-seated problems in the US system under the prevailing bipartisan framework.

It is delusional for Democrats to blame Trump and the Republicans for all the woes of that nation. The notion that America can be returned to some kind of presumed normality if Joe Biden is elected to the White House in November is a fantasy.

Likewise it is delusional for Republicans to scapegoat Democrats for tearing up the social fabric. Trump and fellow Republicans in Congress and in rightwing media are casting all the upheaval of protests and street violence on “radical left Democrats”. That’s just a preposterous denial of how deeply entrenched problems are in the US, from poverty, police brutality and racial discrimination. As well, the notion of “radical left Democrats” is a complete misnomer.

For the US system is fundamentally broken. That is the legacy of the two-party system, both of which are dominated by, and servile to, the corporate power of Wall Street, big business and the military-industrial complex. Right and Left are superficial meaningless American political adjectives. They are both centrally corporate vehicles.

The two parties, Republican and Democrat, are just two sides of the same coin. That coin is corporate power. The US is not a democracy in practice. The voting cycle is just a chimera of “democratic rights” amidst a plutocracy.

The idea of voting out one party to be replaced by the other in order to manifest meaningful change is simply wishful thinking.

Both parties whether they control the executive in the White House or the legislative branch in Congress have presided over endless overseas wars and foreign aggressions, while domestically both parties have overseen massive, relentless impoverishment of the majority of working Americans for the obscene enrichment of a ruling elite. That is the essential function of American capitalism and its imperialist bullying. And neither of the two parties have shown any will or cognizance of opposing that fundamental function.

Barack Obama, the Democrat who extolled “hope and change” brought nothing of the sort. He oversaw more wars and more bombing and killing in foreign countries.

Donald Trump, the Republican maverick, promised to “drain the swamp” and end “endless wars”. He did nothing of the sort.

Nothing changes in the two-party system that defines American politics because the duopoly is designed to ensure that there is precisely no change.

American corporate capitalism and its oligarchy is an entity wired for war. The intrinsic injustice of the system, from its genocidal foundations to the contemporary drive for global dominance, necessitates that violence and war are constant concomitants. Republicans or Democrats don’t change that endemic condition. They merely deliver it with different accentuations.

Take the present reckless escalation of tensions with China by the Trump administration. There seems little doubt that Washington is seeking to corral China for its global ambitions under a range of pretexts, from the corona pandemic to allegations of espionage, which also serves to distract the US public from its massive internal failings as a fractured society.

But Democrat rival Joe Biden is not offering anything different. He is engaging in mindless provocations with China too, trying to outdo Trump as to who can sound more bellicose towards Beijing.

Biden is also posing as the would-be new sheriff in the White House, vowing to get tough on Russia over alleged meddling in US politics. The posturing is an empty, futile fabrication. Meanwhile Trump asserts that “no-one is tougher on Russia” than him. And so down the proverbial rabbit hole we go, never emerging.

Both parties play the foreign bogeyman game as a way to justify American imperialism in the service of corporate capitalism.

That’s why nothing ever changes for the benefit and progress of ordinary Americans, or indeed for the rest of the world which has to endure US aggression over and over.

What needs to change is the entire paradigm of American politics. The two-party system is obsolete. The nation needs to organize political representation to defend and progress the interests of the majority working people. That requires a head-on challenge to the vested corporate powers of Wall Street, big business and its media and the military-industrial complex.

In short, American capitalism has to be reckoned with. Can it be reformed root and branch? Or does it need to be abolished, supplanted altogether by genuine democracy? That’s up to American people organized for their rights to determine. But one thing is certain. There are no answers for progress under the present corrupt duopoly. As it is, America is in terminal decline.