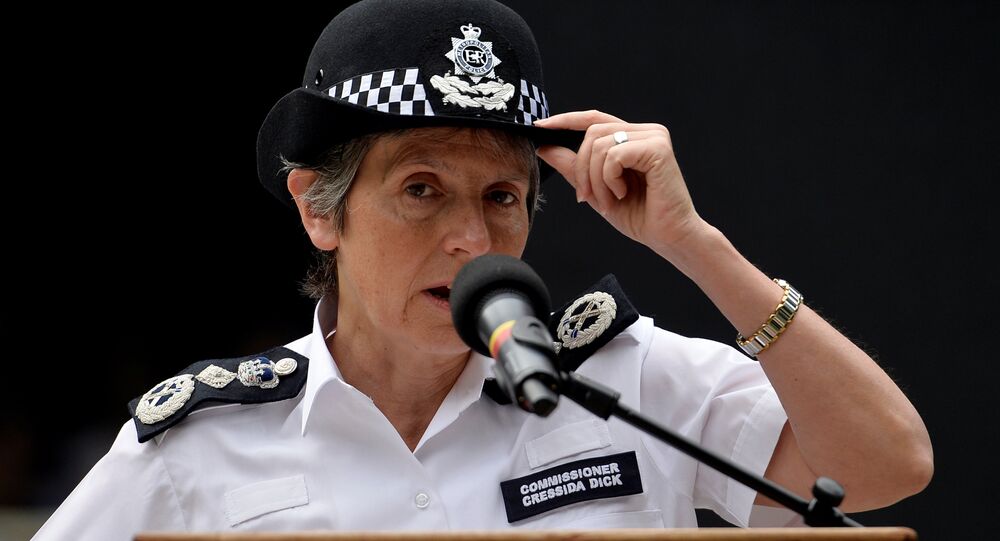 Cressida Dick shouldn’t just be carpeted by Priti Patel over the Brixton riots she should be sacked.

And whilst Priti is at it she should also sack the Chief Constable of Avon and Somerset who allowed his officers to stand by whilst an anarchic mob, hiding within the Black Lives Protest, pulled down the statue of the slave trader Colston.

This would send a clear signal to all the other PC Chief Constables around the UK that the days of rainbow laces, Pride painted panda cars, dancing in the street and skateboarding on London’s bridges with extinction rebellion are over.

Running UK into the Ground

The sight of British coppers running away from a mob in Brixton was a disgrace. After witnessing the same in London and Bristol over the past few weeks, this capitulation to the mob is hard to stomach for the decent silent majority of this country and it has to stop and stop now.

When ‘Dick of the Yard’ allowed officers to take a knee before the Black Lives Protestors she sent a signal to every anarchist, yobbo and hooligan that the Police were weak and also no longer impartial.

It gave a green light to both left and right fanatics that the police when challenged would probably fold and run rather than pull their batons and impose law and order.

Top officers like Counter Terrorism Boss, Neil Basu, don’t help either. Just a couple of days after three gay men were slaughtered in a Reading park by a Libyan asylum seeker who wanted to join Daesh* Basu was busy telling the BBC and other guardian luvvies that the real terror threat is from the "Far Right"! Talking of which why has that story gone so quiet?!

Basu, Dick, most top cops and of course the anti-British Broadcasting Corporation live in a completely parallel universe to the rest of us and despite what political party you vote for these clowns are really the ones who set the tone and run the country.

When I say run the country, I mean run the UK into the ground.

They have ceded the streets to the feral, the feckless and the drugged-up scum.

Some Protests Are More Equal Than Others

They seem unable to intervene with these people and their law breaking but are more than happy to persecute a couple sunbathing in a park or arrest Jeremy Corbyn’s brother at a peaceful demo where he is putting his latest nutty conspiracy theory forward.

They are also quick to order an investigation into a prat who flies a banner behind a plane at the drop of a hat. I wonder why?

But when faced with the prospect of a Black Lives Matter protest, which will attract tens of thousands, Dick didn’t intervene and allowed it to happen despite COVID-19 regulations! Then to add insult to injury she allowed her officers to signal their support by taking a knee.

I think that the majority of Brits would rather see the British Police service getting off their knees and standing up to thugs with batons pulled and fighting fire with fire.

Politicians of all parties also need to back the Police as too many of them are always too silent to voice their support for our cops but are more than willing to supply the ‘right on soundbite’ about a man who was murdered in the USA.

Meanwhile the mainstream media need to refrain from immediately trying to run stories of alleged police brutality or suggest that our coppers are like some of the racist thugs in uniform in the USA.

Speaking this morning, Dick of the Yard said this about the anarchy on the streets of Brixton, "These events are unlawful. They shouldn't be happening and we have a duty to go and close them down and to disperse them. She also stated that, “some missiles were thrown and some aggression shown to the officers which is completely utterly unacceptable".

Why didn’t Dame Dick say this before the Black Lives Protest two weeks ago and why weren’t the police tooled up then as they were in London last night to stop the desecration of the cenotaph and Winston Churchill’s statue at that first protest?

I will tell you why, and with apologies to George Orwell, because some demos and violence are more equal than others, that’s why.

A few weeks ago, in this column, I talked about how the police must not take the knee as they must not show any political allegiance whilst in uniform and that they must police without fear or favour. However, it is clear that is not how the top cops think when they climb the greasy poll and get their Common Purpose Cultural Marxism brainwashing.

Meanwhile the thin blue line of decent real coppers must despair at their leaders; they are truly lions led by donkeys who don’t know their asses from their elbow.

© Sputnik / Mohamed Elmaazi
Black Lives Matter Protests Continue in London - Video
The Police have become a national laughing stock and not just to the hooligans and anarchists. Normal people are losing respect for the cops too.

That’s why no one gives a toss about the social distancing rules on Bournemouth beach.

Matt Hancock can huff and puff and threaten to close down the beaches but he hasn’t got a hope in hell of achieving that.

The cops, still devastated from the 20 thousand job cuts that Theresa May imposed on them, haven’t got the manpower and I guess perhaps even the will to get into another ruck with the general public on the beaches of the south coast this summer. Nor should they.

Unlike many other countries our cops’ police with consent but I am afraid if this PC nonsense, softly, softly, biased out of touch policing continues then it won’t just be the feral the feckless and the criminal rioting on the streets of the UK this summer.

*Daesh (also known as ISIL, IS, ISIS) is a terrorist organisation banned in Russia.