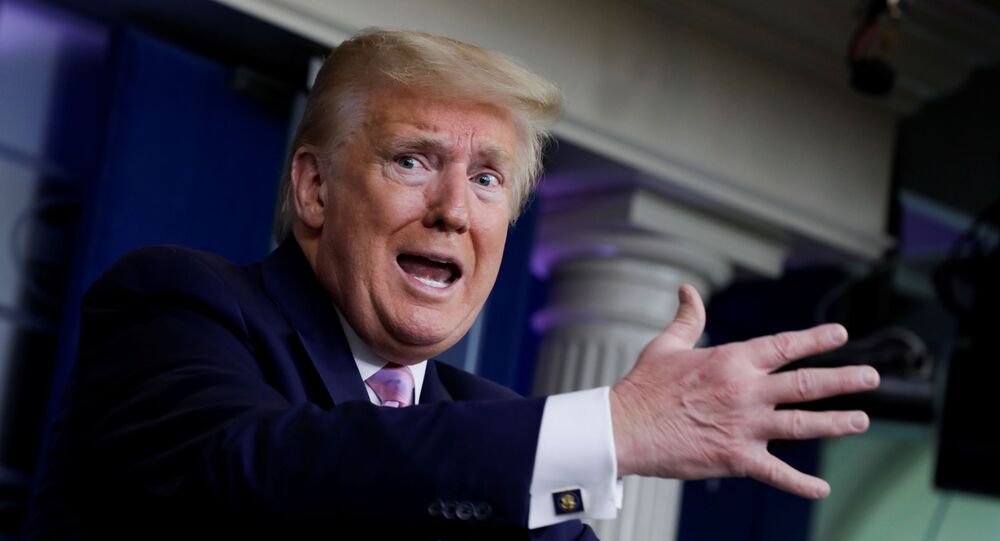 President Trump this week said no-one believes China’s official figures on Covid-19 casualties. Along with his Secretary of State Mike Pompeo, Trump accused Beijing of a cover-up on the scale of the disease.

Almost in the same breath, the White House has also accused the World Health Organization of colluding with China in deceiving other nations about the pandemic danger. To supposedly prove his point, Trump cut off US funding to the WHO.

China has slammed claims of it conducting a cover-up, saying it provided early warning to the rest of the world about the deadly outbreak.

Part of Trump’s skepticism towards China’s data appears to stem from the country’s relatively low numbers of infection cases and deaths. This week, China’s infection cases were about 82,000 while its deaths numbered over 4,000. That was after an upward revision on earlier data concerning the city of Wuhan where the new coronavirus disease erupted in December. Beijing says such revision is normal practice by all countries as mortality information is gathered. In Britain, for example, it is reckoned that deaths have so far been greatly underestimated due to lack of counting deceased in elderly care homes. Is anyone accusing the British government of a cover-up?

In any case, what seems to be bothering The Donald and other Western leaders is just how low China’s pandemic figures are by comparison with their own.

In the US this week, the infection cases and death toll are upwards of 700,000 and 34,000, according to this global counter. That’s massively greater than figures in China. Likewise the casualty rates in Italy, Spain, France and Britain are way out ahead of what China has reported.

That huge disparity has led Western politicians to accuse China of a cover-up or at least not coming fully clean with evidence. Because to reflect on the enormously discrepant figures it otherwise makes the Western countries look extremely bad in their mishandling of the public health crisis. The exploding casualties indicate gross ineptitude and dereliction of public health services (which is correct). In which case, it is politically expedient, and indeed imperative, to find a scapegoat in order to cover-up for the monumental incompetence of Western leaders. Ironically, it’s not China which is doing the covering up. It is the West and their criminally incompetent governments and their slavish adherence to capitalist priorities. Private profit before people.

The US and President Trump are potentially most acutely exposed for their ineptitude in coping with the Covid-19 crisis. The pandemic ripping through American society is down to Trump’s callous complacency which was displayed for weeks after both China and the WHO explicitly warned of a public health crisis as far back as the end of January.

The American crisis is also down to the parlously insecure state of American workers living on the edge of financial ruin and an underfunded crumby health care system that puts corporate profit before human need.

Same goes for Britain and many other Western states. The fact is that the Covid-19 pandemic has exposed all their chronic failings to protect public health. That’s why it is imperative for the Western culprits to blame China for allegedly deceiving them into supposedly not being able to make adequate preparations.

The Western inference that China’s Covid-19 figures are unreliable are contradicted by data from South Korea. It was one of the first countries outside China to be put on alert over the epidemic. But it was early and rapid action by South Korea’s government that ensured the impact was kept relatively low. Out of a caseload of 106,000 infections, some 230 South Koreans have died from the disease. Compare that with Britain, where the caseload as of this week is similar, but the death toll stands at over 14,000, two orders of magnitude greater.

© REUTERS / Kim Hong-Ji
A couple takes a walk near a cherry blossom trees street, closed to avoid the spread of the coronavirus disease (COVID-19), in Seoul, South Korea, April 1, 2020

South Korea’s effectiveness in containing the Covid-19 pandemic shows that the right government action of massive testing, tracking and quarantining can succeed. China’s record is apparently not as good as South Korea’s, but nevertheless is comparable in the scale of its success. Western governments and media are not accusing South Korea of a cover-up. And if South Korea can succeed in the way it did, then it is entirely feasible that China did also by the same proactive intervention of testing, tracking and lockdown. To claim China is lying about its figures is to willfully ignore the success of South Korea against Covid-19.

Trump and other Western leaders are scapegoating China over Covid-19 because they can’t allow the public to ponder on the shameful and awful truth: that their governments let them die unnecessarily.