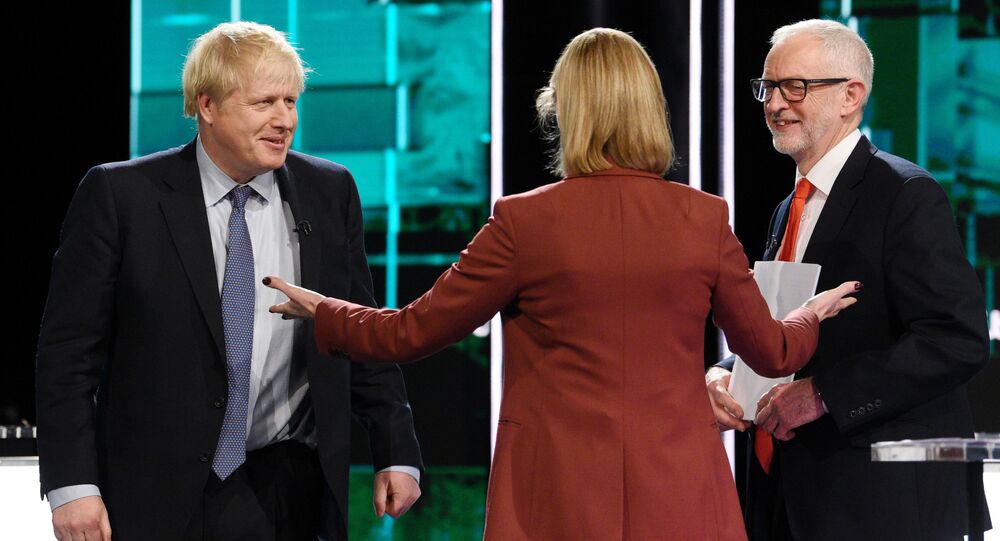 Before Tuesday’s ITV Leaders’ Debate Boris Johnson visited a Manchester boxing gym to get himself into shape for a first election face-off with Jeremy Corbyn. He donned specially made blue ‘Get Brexit Done’ gloves and shuffled around the ring throwing some punches for the cameras.

He even had a pad man instruct him on a few nifty combinations but did the experience set him up for a knock-out blow against the Labour leader during their verbal sparring bout? The answer is no. In truth it was a dull as dishwater fight with both men showing signs of nervous tension which clearly inhibited their performances.

Johnson set his store out from the first bell. Brexit, Brexit and Brexit again like a slow, robotic jab no matter the nature of the attack he faced.

In truth from a boxing point of view the jab is the most essential and often the most damaging punch in your armoury. Even if you have no other punch you can survive and even win a boxing match with an effective jab. Of course that depends on your opponent and their prowess and ability to effectively bob, weave and avoid the jab while landing punches of their own.

On the issue of Brexit the truth is Corbyn’s punches are weak. Like many socialists he knows the EU is a big business club determined to promote the interests of the rich and the corporations at the expense of ordinary workers. The austerity budgets enforced on Greece, Portugal, Ireland and other member nations in recent years is proof of that.

Corbyn couldn’t throw his left uppercut under the Johnson jab because although he recognises the true anti-socialist nature of the EU, most of his MPs are stuck in a nostalgic 1980s time warp when under Thatcher and her free market capitalism on steroids, privatising everything in sight and sending millions onto dole queues of hopelessness; the social EU project of Delors and co appeared like an ally in the fightback against Thatcherism and Reaganomics. In those days the EU did present itself as a less rabid free market beast than it is now. It was a smaller club back then and was anxious to appear progressive in aims and pronouncements but with the influx of former Soviet bloc countries in the 1990s the anti-socialist agenda was ratcheted up a few notches.

Unfit to be Prime Minister

However as the fight progressed it became abundantly clear that Johnson didn’t have another punch. He tried a 20,000 extra policeman hook and a 40 new hospitals right hand pile driver only to be sucker punched in the solar plexus by Corbyn’s rock solid left hand reminder that it was the Tories who slashed the police numbers by 22,000 in the first place and their 40 new hospitals amounted in reality to six reconfigurations.

With an easy combination Johnson was then put on the ropes with the recent NHS Report which revealed the worst waiting times and performance levels since records began.

Years of dodging training sessions and over indulging in the consumption of alcoholic beverages should have put Johnson on the floor when the question of honesty and personal integrity was raised by an audience member. Surely Corbyn would land a knockout blow given the countless half-truths, distortions and downright lies Johnson is now notorious for? The side of the bus lie about money for the NHS from Brexit; the Turkish invasion of immigrants on the back of their imminent EU membership lie; the 40 new hospitals that turned out to be six reconfigurations; the lies that got him sacked from his columnist job and as a shadow spokesman under former Tory leader Michael Howard. Former employers condemn him as a wholly untrustworthy individual who is “utterly unfit to be prime minister”.

His jaw was exposed. Surely he would be knocked down. Unfortunately not!

Jeremy Corbyn reminded me of scores of competent boxers throughout the years. Honest grafters with a decent repertoire of punches and admirable stamina to see out a full 12 rounds but without a killer punch, a knockout blow. Corbyn was far too polite and willing to play by the Queensbury boxing rules against an opponent who uses low blows, elbows and head butts without a second thought because he thinks he has a divine right to win.

Johnson is a dirty fighter, a cheat and a liar. Corbyn kept him at bay and possibly won on points simply due to the larger number of punches landed on austerity and the waste of life, the grotesque inequalities between billionaires and ordinary workers and the need to pay living wages to lift millions out of poverty. But in a contest where the judges, promoters and advertisers are inherently against you I’m afraid honest graft is not enough. Knockout blows and some harder hitting is required to re-balance the rigged contest.

I watched BBC News at Five today to get me into the mood for tonight’s contest. It was beamed from Southampton, a key marginal seat called Itchen where the Tories hold only a 31 majority. The programme presenter, Simon McCoy, announced they were in Southampton’s Itchen constituency to establish “how local businesses feel about the election”. He introduced Bob Terris, the boss of a truck and freight company and Gary Bennetton, a nightclub owner. Bob’s nugget of wisdom was the forthright statement that “the only party capable and with the business sense to run the country is the Conservative party”. On you go Bob, I’m sure the Knighthood is in the post!

Surely Gary would provide some balance. Aye, right. According to the bold Gary Jeremy Corbyn’s policies are “just not sustainable”. Two punches in the face for Corbyn before the straight-faced McCoy says to camera “That’s the view of business here in Southampton”. Job done. Two bosses wheeled in to announce their intentions to vote Tory and how, in their esteemed opinions, only the Tories can be trusted to run the economy. Well wealthy individuals like them and the millionaire and billionaire clique would say that but it is only their views, not the views of “business here in Southampton”.

Like obedient lap-dogs, the BBC do their job every day despite the so-called purdah and electoral balance and constantly undermine the competence of Corbyn’s Labour to govern. That is the rigged contest they are fighting in. That’s why knockout blows are required.

As far as Scotland is concerned we were insulted both before the ITV show and during it. Despite being the third biggest party at Westminster Nicola Sturgeon was disgracefully excluded from the debate and forced to appear in a later downgraded affair with non-entities like Fraudage. Scotland’s party and voice was excluded. During the debate Johnson behaved like the tin-pot dictator he is and declared he is “ruling out” another independence referendum. Despite the SNP winning the 2015, 2016 and 2017 elections in Scotland he is ignoring the wishes of the Scottish people. His party will be wiped out up here on December 12th but he will still ignore us.

Corbyn was almost as bad in trying to deflect accusations that he was prepared to enter into a deal with the SNP to get into power. Instead of being honest and democratic with a retort along the lines of: “of course, we will accept SNP support to lock out your right wing party of reactionary millionaires and privateers intent on selling off our NHS to US Corporations and as the SNP already have a democratic mandate for IndyRef2 it would be a democratic outrage to deny it”, he waffled about ruling out deals and no referendum in the first two years in government.

I’m sorry Jeremy. I like you. But you are out of order here. IndyRef2 is for us in Scotland to decide, not you, and the SNP election victories and Scottish Parliament votes are democratic mandates you should be recognising if you want to retain your democratic credentials.

In boxing terms tonight’s fight was a pretty turgid affair involving one fighter with only a single punch in his locker which he used constantly against an opponent with lots of punches available but unable to land them firmly or consistently. If Jeremy is to have any chance of winning England and Wales he will have to be prepared to throw a lot more punches with improved power and accuracy. It is a fight he can win. Johnson is a discredited, one punch wonder blowing more hot air than a tumble dryer. He can be taken. As for Scotland we are fed up being ignored and exploited. Our nominated prize fighter is Nicola Sturgeon and in Scottish terms she will be announced the undisputed champ on December 13th.